The Story of the USS Halibut: A Submarine Like No Other 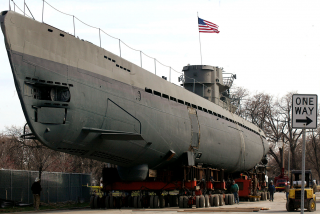 Here's What You Need To Remember: The Halibut and other submarines began regular courier runs to install new tapes on the tap while bringing back the old tapes for analysis by the NSA in what was called Operation Ivy Bells.

Since 2015, there have been reports of Russian submarines and spy ships trawling the waters near the ocean-spanning underwater fiber-optic cables vital to trans-oceanic Internet access. In fact, reported activity by spy ship Yartar off the U.S. nuclear-armed submarine base in King’s Bay, Georgia is likely in search of secret military cables used exclusively by the Pentagon.

The Russians might be interested in hacking into those cables because the U.S. Navy pulled of such an exploit forty-six years earlier using a specially-modified spy submarine, a nuclear-powered wiretap, and some helium-swilling aquanauts.

Commissioned in 1960, the USS Halibut was a one-of-a-kind nuclear-powered submarine designed to launch Regulus II nuclear-tipped cruise missiles. The 5,000-ton submarine housed two 17.5-meter-long Regulus II missiles in a grotesquely bulged hangar on her foredeck. The missiles were launched while surfaced from a hydraulically extended ramp to strike targets up to 1,150 miles away.

However, by the time the Halibut entered service, the Navy had developed the Polaris, the U.S.’s first Submarine-Launched Ballistic Missile, which could be fired from underwater into space to strike target nearly 3,000 miles away. The obsolete Regulus II was canceled a year before the Halibut was commissioned in 1960, and the submarine spent four years lugging five older Regulus I missiles on deterrence patrols before these too were retired.

Still, the Navy saw useful potential in the Halibut’s unconventional layout, and in 1968 she received a unique overhaul. The bulged missile hangar was converted into the ‘Bat Cave’ (inspired by comic book character’s lair) stuffed full of spy equipment, including a rare 60s-era 24bit UNIVAC computer, a retractable seafloor-scanning sonar, and a photo-developing lab. A well underneath the Bat Cave could deploy two 2-ton ‘Fish’—remotely operated underwater spy vehicles. Halibut’s lower hull had special thrustors and anchoring winches to maintain its position on the sea floor and later received four skids allowing it to safely ‘land’ there.

An apparent mini-submarine was prominently strapped onto the Halibut’s rear deck, which the Navy publicly boasted was a Deep Submergence Rescue Vehicle (DSRV) simulator. This was a deception: the pod actually housed a special pressurized chamber for use by saturation divers, with an integrated diving lock.

Deep-sea divers risk decompression sickness (the ‘bends’) caused by gas bubbles forming within the body when reacclimatizing to regular air pressure. Based on technology pioneered in the SEALAB underwater habitats, the pressure chamber was designed to give divers a long-term pressure-stable habitat so they would only need to depressurize once at the end of their mission. The divers used oxygen mixed with helium rather than heavier nitrogen to aid acclimatization. You can see an amazing diagram by HI Sutton of the Halibut and its gadgets here.

The Halibut’s first mission was to locate the Soviet ballistic missile submarine K-129, which on March 8, 1968 sank nearly 5,000 meters to the bottom of the Pacific Ocean under mysterious circumstances. The Soviet Navy searched for K-129 for months, but it was the Halibut that finally found her with her “Fish” that August, after having the search radius narrowed to ‘only’ 1,200 square miles using data from the Navy’s SOSUS hydrophone network.

In 1972, the Captain James Bradley of the Office of Naval Intelligence thought of a new use for the Halibut. The Soviet Navy maintained a major nuclear-missile armed submarine base at Petropavlovsk on the remote Kamchatka Peninsula. Bradley felt it was likely that the base maintained an undersea communication cable to transmit messages directly across the Sea of Okhotsk.

However, the cable’s presence was not even confirmed, so how was it to be located? Bradly was inspired one day by recollecting the signs he had seen on the side of the Mississippi River warning ships not to lay anchor in areas near underwater cables. (Anchors remain a frequent cause of damaged cables.)

Reasoning the Soviets would use similar signs, he dispatched the Halibut off the coast of Kamchatka to search for them. The Halibut was not particularly quiet by the standards of modern submarines, and she risked being attacked if she was discovered penetrating the perimeter formed by Soviet naval bases on the Kuril Islands seized from Japan at the end of World War II. In fact, the Halibut had a self-destructive device to ensure she and her crew could not be captured.

After a week of snooping, the Halibut’s crew finally spotted beach signs in Cyrllic warning ships not to lay anchor. Discretely, the technicians in the Bat Cave began scanning the seafloor with her ‘Fish’, and in a matter of hours spotted the cable 120-meters below the sea via a grainy video feed. The 5,000-ton submarine carefully settled close to the seafloor, deploying her special anchors. The elite saturation divers in the pod swam out to the cable and wrapped a three-foot long magnetic induction device around the cable. Rather than risking damage and detection by piercing inside cables, the tap recorded the activity passing through the cable.

The operation was considered so secret that most of the Halibut’s crew were told their mission was to recover fragments from a P-500 “Sandbox” missile test for analysis. The supersonic anti-ship missile was rumored to use an advanced infrared-seeker. To reinforce the cover, after recording several hours of conversation, the Halibut sailed to the site of the test and her dovers did recover two million tiny P-500 missile fragment, which were reassembled jigsaw-like until it was discovered that Sandbox used only radar guidance!

The brief tape was brought back to Pearl Harbor and found to be highly promising. The Navy rapidly commissioned a new six-ton wiretap device from Bell Laboratories called ‘the Beast’ (photo here) which used a nuclear power source and a massive tape recorder to records of weeks of conversation across multiple lines at the same time.

The Halibut returned and installed this new device, and the sub’s crew were soon listening in on Soviet telephone conversations, celebrating their success by feasting on a spider crab scooped up from the sea floor.

Thenceforth, the Halibut and other submarines began regular courier runs to install new tapes on the tap while bringing back the old tapes for analysis by the NSA in what was called Operation Ivy Bells. The Halibut herself was decommissioned in 1975, and the courier runs taken over by the USS Parche, Sea Wolf and Richard B. Russell.

The tapped cables provided a treasure trove of intelligence for the NSA: mixed in between personal calls to family and sweethearts were private conversations on sensitive political topics and detailed information on Soviet submarine operations. Much of the Soviet traffic was unencrypted because cables were considered a highly secure form of communication.

This candid, unfiltered portrait of the Soviet Navy’s state of mind vis-à-vis the United States reportedly influenced U.S. military leaders to deescalate activities which were threatening to panic Moscow, and also apparently informed the Washington’s negotiating posture for the SALT II treaty which limited the size of strategic nuclear weapons forces.

The cable-tap operation did have its risks. In Sherry Sontag’s book Blind Man’s Bluff, he describes how on a later tape-recovery mission, a sea storm bucked the Halibut to and fro until her anchors snapped, causing her to begin rising uncontrollably with divers trapped outside. The Halibut risked exposure in Soviet territorial waters, and her tethered divers risked death from rapid decompression. Captain John McNish decided to flood the Halibut until it smashed onto the seafloor and brought the divers back into their pressure habitat. But now the Halibut was dangerously mired.

After completing the planned data collection, the Halibut tried a dangerous emergency blow to free herself from seabed sediment, followed by an immediate dive to avoid breaching the surface. The submarine had only enough compressed air to try the maneuver once—and luckily, it worked.

In 1980 mishap also befell the USS Sea Wolf, which was uniquely equipped with a liquid metal-cooled nuclear reactor. On one tape-recovery mission, a storm caused her to crash into the seafloor and become stuck, with mud and mollusks gumming up her insides. Her captain considered scuttling the vessel before he managed to wriggle it free to surface in a noisy emergency blow out. After this incident, Soviet ships were observed heading towards the site of the cable tap.

However, it was human frailty, not sea storms or Soviet sonars, which brought an end to the intelligence bonanza. When the Parche went to pick up the latest tape, the tap was missing.

In July 1985 Soviet KGB defector Vitaly Yurchenko revealed that Ronald Pelton, a heavily indebted former analyst for the NSA, had walked into the Soviet embassy on January 14, 1980, and sold the secret of Ivy Bells for $5,000—with an additional $30,000 paid for later consultation. This led to the tap’s removal by Soviet divers, though it’s possible that the Soviets might have planted misleading information in the cable traffic before doing so.