The Stribog SP9A1 Has Won The Pistol Caliber Carbine Contest 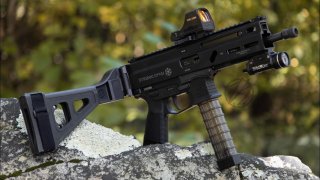 Here's What You Need To Remember: Ergonomically, the SP9 is pretty generic, featuring the proven layout of most modern long guns: magazine catch pressable by the trigger finger on both sides, and a rotating selector accessible by the thumb. The charging handle is placed forwards in the handguard, easily accessible and non-reciprocating on current versions.

As pistol caliber carbines (PCCs) see a resurgence in popularity, an odd Slovakian carbine has become the darling of many in the gun media. Complete with a healthy dose of Slavic branding and a lot of design cues taken from the much more expensive B&T APC9, the Stribog SP9A1 is considered by some to be one of the best PCCs in its price range.

But how does it compare to other designs on the market? From just across the border, the Czech Scorpion EVO 3 is the current market leader and a big rival. Other designs such as various American clones of the Russian PP-19-01 Vityaz are also gaining popularity. Swiss B&T also has a lower price offering in the GHM9, and even the American CMMG has developed an innovative PCC in its “Mk” series of radially delayed blowback carbines.

First, the action. Like most PCCs on the cheaper range of the spectrum, the Stribog SP9A1 is a straight blowback. But like other, more recent straight blowbacks it features a rubber buffer at the end of the bolt’s travel to dampen the recoil. These buffers come in a variety of shapes and sizes, with the fanciest being a hydraulic piston used in the B&T APC9. The Stribog’s is fairly simple, being a series of polymer pads in the recoil path of the bolt. By most accounts, the buffer works fairly well, rendering it with a recoil impulse nicer than that of pure blowbacks, but still worse than most locking bolt designs. A similar design is used on the PSA AK-V.

Ergonomically, the SP9 is pretty generic, featuring the proven layout of most modern long guns: magazine catch pressable by the trigger finger on both sides, and a rotating selector accessible by the thumb. The charging handle is placed forwards in the handguard, easily accessible and non-reciprocating on current versions. Where it differs is in the bolt catch, which is a lever that moves up and down as opposed to a simple “button”. The benefits come from the catch being the same on both sides, but this can lead to some confusion for those used to AR-style controls, as one much depress the lever instead of just pressing a button to release the bolt. However, it is similar to the CZ Scorpion, which also features a lever as a bolt catch. As with most modern guns, the stock and pistol grip can be swapped out for most AR-compatible pistol grips and stocks (with an adapter).

Overall, what PCC is best comes down to what “parts ecosystem” a user is already part of. In the sub-$1,000 range, if one is familiar with ARs, but doesn’t want to buy an AR-style PCC, the Stribog would be a good choice. If one is familiar with AKs, the AK-V. The Scorpion is the odd one out, having its own set of proprietary parts. But all are basically the same despite their differences, with the better gun for an end-user largely coming down to personal preference. However, none are as good as those in the more expensive range such as clones of the MP5, CMMG’s Mk-series, or B&T’s APC9 Pro.