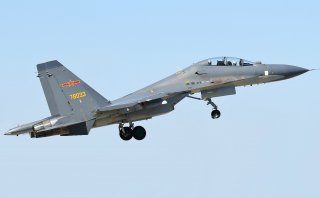 Here's What You Need To Remember: Longer flights naturally increase strike range but also add to dwell time over target areas and make otherwise inaccessible areas within reach. This kind of tactical change is of particular significance for the harder-to-reach places in the South China Sea region.

“The Su-30 fighter jet refueled mid-flight with an aerial tanker, and the pilots consumed rations to keep up their energy,” the Global Times report states.

The flight reached some of the most “remote islands and reefs of the South China Sea,” the paper states, making the point that expanded flight time multiplies mission options.

Of course, longer flights naturally increase strike range but also add to dwell time over target areas and make otherwise inaccessible areas within reach. This kind of tactical change is of particular significance for the harder-to-reach places in the South China Sea region.

Improved flight duration also enables fighters based in mainland China an added opportunity to operate in the South China Sea, something difficult for a significant number of the PLAAF’s fighters.

The Global Times quotes a Chinese aviation expert saying, “fighter jets deployed on the islands can react faster, but that maintenance on the islands is more difficult due to high salinity and humidity, and the number of fighter jets would be limited since island bases are relatively small.”

Air reach to the South China sea in greater numbers could help the PLAAF compensate for its small number of aircraft carriers. Also, basing fighters on islands in the South China Sea claimed by China could be seen as a highly provocative decision.

For example, this has already happened on some islands. Beijing’s move generated strong criticism from the Pentagon, who denounced it as further militarizing the region. Washington sees such efforts as part of an effort to change the strategic landscape in the highly contested region.

While China did recently launch sea trials for its second domestically built carrier, the Chinese Navy does not have anything close to the carrier-empowered attack options available to U.S. maritime commanders.

China recently sent its Liaoning and Shandong carriers into areas of the South China Sea for drills. The move heightens ongoing concerns among many that China may be considering an invasion of Taiwan should tensions escalate. The two carriers were in Bohai Bay in the Yellow Sea in preparation for War Game drills.

Kris Osborn is the defense editor for the National Interest. Osborn previously served at the Pentagon as a Highly Qualified Expert with the Office of the Assistant Secretary of the Army—Acquisition, Logistics & Technology. Osborn has also worked as an anchor and on-air military specialist at national TV networks. He has appeared as a guest military expert on Fox News, MSNBC, The Military Channel, and The History Channel. He also has a Masters Degree in Comparative Literature from Columbia University. This article first appeared earlier this year,.