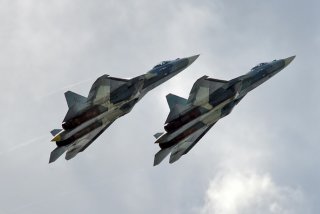 Here's What You Need To Remember: The crash has all but negated the Kremlin’s plan to deliver the first serial Su-57 by the end of 2019, but prominent Russian defense commentators continue to project confidence about the long-term viability of Russia’s fifth-generation fighter project.

What appears to be the first serially-produced Su-57 has crashed and exploded during a training session in Russia’s Far East, putting into question the Kremlin’s ambitious production plans for its fifth-generation fighter program.

“The [Su-57] fighter crashed during testing in Taiga, far from Komsomolsk-on-Amur. The pilot managed to eject himself. The pilot was found, and is being transported by Mi-8 helicopter to the Komsomolsk aircraft plant,” a Komsomolsk-on-Amur representative told TASS state news. The pilot is safe, but the crashed Su-57 is widely reported to have exploded and is now likely beyond repair. This fighter is believed to be the first serially produced Su-57, which was supposed to be transferred to the Russian Air Force later this week.

A committee has been formed to investigate the cause of the accident. Investigators still haven’t conclusively discounted the possibility of operator error, but multiple sources, including TASS, continue to ascribe the crash to an unspecified control system failure.

Nevertheless, some recent reports have raised the possibility of an altogether different cause: engine failure.

The Su-57 was designed to be powered by the new Izdeliye 30 engine, but pre-production models had to be tested with the older Izdeliye 117 (AL-41F1) engine due to engineering setbacks. The first serial Su-57 is widely confirmed to have been powered by the old Izdeliye 117, and RIA News confirms that the crash did, in fact, occur during an engine test.

A subsequent interview was given to RIA by military expert and former Airforce Officer Valeriy Gorbenko further suggests that the Su-57 was undergoing an extreme engine stress test before being handed off to the Russian Air Force. These details do not conclusively implicate engine malfunction as the culprit, but may prompt the Russian Defense Ministry to reassess the question-- frequently voiced by The National Interest over the past several years-- of whether or not the Izdeliye 117 engine can reliably power the Su-57. The current mass-production readiness of Izdeliye 30 remains unclear, nor is it known how many of the 76 serial Su-57's to be delivered by 2028 will be shipped with the older engine.

Russian military expert and deputy editor of the Russian defense publication “Arsenal of the Fatherland” Dmitry Drozdenko has told Vzglyad newspaper that it is premature to speculate on how this may impact the mass-production of the Su-57 over the coming decade. Only a handful of functional Su-57’s exist, and Drozdenko argues that “each one of them is essentially unique.” For Drozdenko, the Su-57 is at such an early period in its life cycle that it is difficult to distinguish the unique malfunctions of specific pre-production models from general malfunctions in the mass-production process. Further compounding the current sense of confusion, it remains to be seen if possible difficulties in salvaging the destroyed Su-57 will impede the ability of the investigation to reach a conclusive judgment as to the accident’s cause.

According to a mid-December announcement from General Valery Gerasimov, the Su-57 successfully underwent another round of testing in Syria several weeks ago. It is unclear how many Su-57’s were deployed in Syria, or if the crashed Su-57 was among them.

The crash has all but negated the Kremlin’s plan to deliver the first serial Su-57 by the end of 2019, but prominent Russian defense commentators continue to project confidence about the long-term viability of Russia’s fifth-generation fighter project.

Mark Episkopos is a frequent contributor to The National Interest and serves as a research assistant at the Center for the National Interest. Mark is also a PhD student in History at American University. This article first appeared two years ago.