Subbed Out: Why France Isn't Part Of AUKUS 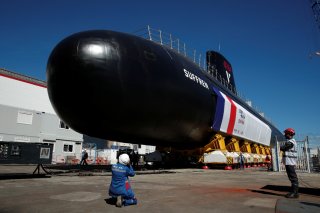 But while AUKUS shows a seriousness about naval power, it shows an even greater seriousness about alliances. The trilateral initiative seeks to expand an existing alliance structure — the Five Eyes intelligence alliance — into the field of leading-edge defence technology and industry. AUKUS goes much deeper than submarines — but it cannot do everything.

The Biden administration promised to prioritise strategic competition with China, and to reinvigorate Washington’s alliances. Progress on this has been positive, but incremental. Aside from some high-level visits, Biden’s most notable initiative was elevating the Quad — comprising Australia, India, Japan and the United States — to the summit level.

AUKUS is qualitatively different. The submarine deal alone enmeshes the United States and United Kingdom into the region for decades. But more ambitiously, beyond submarines, AUKUS seeks to win the technology competition with China by pooling resources and integrating supply chains for defence-related science, industry, and supply chains. This will be the decades-long and multifaceted purpose of AUKUS — a transnational project racing to seize advantages in artificial intelligence, quantum computing and cyber technology.

The technologies at the heart of AUKUS are at the cutting edge of scientific research, and promise to deliver unprecedented advantages in military power. The submarine project will likely serve as a forcing function to drive much of this new collaboration. It is still unclear how much of the submarines’ nuclear propulsion technology will be shared with Australia, but the Australian defence community will almost certainly gain access to the submarines’ other state-of-the-art technologies, including sensors and data-processing systems for maritime domain awareness and tracking and evading adversary forces.

What makes the United Kingdom and Australia Washington’s most valued technology partners? They are members of the Five Eyes intelligence alliance, which over decades has developed joint systems, organisations and processes for sharing collection responsibilities and intelligence data.

Less tangibly, but at least as importantly, this has cultivated mutual trust and habits of cooperation, including through the past two decades combating terrorism and fighting wars in Iraq and Afghanistan. Compared to the other Five Eyes members, Canada and New Zealand, the United Kingdom and Australia are also demonstrably more committed to upholding the strategic vision of a free and open Indo-Pacific.

This is probably also why France was excluded from the grouping, prompting a sudden and ugly diplomatic spat. Despite its likeminded interests in the region, and despite its military power and activism, France does not share the systems and relationships that define the Five Eyes. In the years to come, AUKUS will gain greater regional acceptance and utility if it figures out how to share some of its prized defence technology and data with other partners, including France and others in the region.

AUKUS may represent the closest integration among partners, but it cannot do everything, and it cannot replace other groupings. The region requires a new security architecture, but unlike Cold War umbrellas like NATO, this architecture will comprise multiple, overlapping groupings, each with different roles and strengths. AUKUS’s technology-sharing mission is invaluable, but it is limited.

Different groupings serve different purposes. The Quad will remain critical for coordinating the strategic policies of China’s most powerful regional competitors, for presenting a common vision of regional order, and for acting as the nucleus for broader cooperation when needed. At its first in-person summit last week, the Quad reiterated its broad vision of promoting a free and open Indo-Pacific. And as the Indian government recently declared, AUKUS does not compete with or undermine the Quad.

Other partners like France and India cannot be full members of AUKUS, but they are indispensable in other roles that AUKUS cannot replicate. They each have significant military power, valuable geographic advantages and abiding networks of influence. And they are each vigorously engaged in the region, including through bilateral and trilateral partnerships with Australia.

The members of AUKUS should therefore work hard to repair their relationships with France because broad overlapping partnerships are a key asset in strategic competition with China. But not all regional challenges require a broad, inclusive approach. AUKUS’s declared objectives are radical — unseen in the firmament of US alliances, and certainly unseen in the region — and only possible precisely because the initiative is so exclusive.

Arzan Tarapore is a Research Scholar on South Asia in the Walter H Shorenstein Asia-Pacific Research Center at Stanford University and a Senior Non-Resident Fellow at the National Bureau of Asian Research, Washington. This article was originally published in East Asia Forum.