This Submarine Is Something Scary: How China Is Placing Nukes Under Water 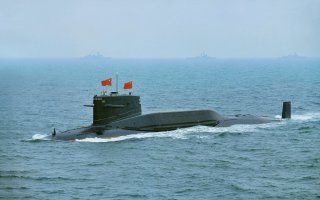 Here's What You Need to Know: China’s military is notoriously tight-lipped.

The Type 092, or Xia-Class submarine as it is alternatively known, is a lonely submarine, it is the only hull of its class, and was China’s first attempt at shooting nukes from underwater.

China’s nuclear deterrence has historically centered not on an overwhelming first-strike capability like that of the United States or the Soviet Union, but rather something more modest—preserving enough of a second-strike capability to cause an opponent to pause before mounting an attack on China, or being involved in China’s neighborhood. The Type 092 and JL-1 was a key part of early Chinese deterrence.

The Type 092 was originally built in the early 1980s for the People’s Liberation Army Submarine Force. As such, it was China’s first-ever nuclear-powered ballistic missile submarine, and the first in Asia. The Type 092 is based on the early Type 091, also a nuclear-powered submarine, which was stretched to accommodate space in the hull for nuclear ballistic missiles—the surprisingly ineffective JL-1 missile family.

In addition to standard 533-millimeter torpedos, the Type 092 class came equipped with the JL-1 ballistic missile, China’s first submarine-launched nuclear ballistic missile. Though not spectacular, the JL-1 had a range just under 1,800 kilometers, or about 1,100 miles. An improved variant, the JL-1A had a slightly longer range of 2,000 kilometers, or about 1,300 miles.

The very low range of the missiles stands in stark contrast to the range of the United States’ and Britain’s Trident nuclear ballistic missiles—whose minimum range is 2,000 kilometers. The Type 092 would have to be just off the eastern seaboard to put Washington DC in range. Probably due to this limitation, both variants are thought to be out of service, though the JL-1 may have had a second life as a road-mobile missile with China’s missile forces.

China’s military is notoriously tight-lipped, complicating attempts to report on Chinese defense issues. However if reports are to be believed, the Type 092 may never have left Chinese territorial water at all.

Though that may not be surprising. During its lifetime, the Type 092 was touted as a crucial part of China’s nuclear deterrent. This may be false—with just a single SSBN, China could not possibly hope to mount a nuclear strike capability with any degree of certainty.

The Type 092 in actuality may have merely served as a test platform for improving China’s nuclear deterrence capabilities—though not regarding its acoustics and concealment capabilities. The Type 092 is possibly the loudest missile submarine in China, Russia, and the United States. Not a good characteristic for staying hidden under the waves.

The Type 092 has since been superseded by the much more capable Type 094 class. Still, the Type 092 demonstrated that China could preserve a second-strike capability underwater.