The Surprising Shortlist of The Worst Guns in History 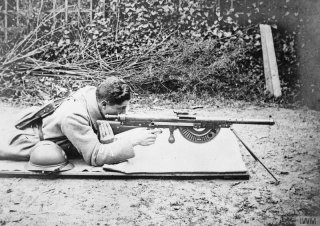 Here's What You Need To Remember: Guns are tools meant to address life or death situations, so a poorly designed or manufactured gun often earns particular scorn. The gun world has long memories of particularly bad firearms, many of which sealed the fate of brave soldiers. The rapid pace of firearms development in the nineteenth and twentieth centuries meant that few if any mistakes were repeated, but the memories of these weapons—some with lethal consequences for the owner—linger go on. Here are five of the worst guns ever made.

Produced by the Gladiator bicycle company, the French Chauchat machine gun was one of the very first squad-level automatic weapons ever produced. Made for the French and later American armies during World War I, the Chauchat even looked like it was made from bicycle parts, using a great deal of metal tubing nearly identical to that found in bicycle frames. The weapon was capable of only firing three hundred rounds between jams under the best of circumstances, and the trenches of the Great War were far from that, with mud and dirt liable to work its way into the Chauchat’s innards through its many openings and foul the weapon. The gun was poorly designed and often punched the shooter in the eye or cheek if improperly held. Despite these shortcomings, the Chauchat soldiered on, mostly because there was nothing to replace it with. While the gun deserves credit as the first of its kind, the fact that all major armies removed it from service at the end of the war speaks for itself. The Chauchat was replaced in U.S. service with the much improved M1918 Browning Automatic Rifle.

Although Germany started the war with the bolt action Karabiner 98k, as the fighting dragged on German engineers looked for ways to increase the individual soldier’s rate of fire. One result was the Gewehr 41. The Gewehr 41 was adopted an early gas piston, rotating-bolt rifle operating system that was featured in the M1 Garand. The Garand, however, did a much better job of implementing it. The G41 was expensive to manufacture and the machining involved was complicated. The weapon demanded constant and meticulous maintenance, and its muzzle often fouled. At eleven pounds unloaded it was more than two pounds heavier than the 98k, and the weapon was poorly balanced. Although a semi-automatic weapon the integral, nondetachable magazine was slow to load, limiting the rate of fire.

The Colt 2000 was the legendary American company’s response to the Austrian Glock pistol—and the worst of the company’s many recent misfires. Despite being developed by noted gun designers Reed Knight Jr. and Eugene Stoner (inventor of the original AR-15 rifle) the Colt 2000 was an embarrassing failure. The actual design of the gun was theoretically quite good, with a polymer frame coupled with a metal slide to shed weight, a double-stacked magazine that held fifteen rounds and a striker-fired design. Unfortunately, the gun had serious reliability problems, with many owners experiencing failure to extract jams, poor accuracy and a safety recall. The Colt 2000 was billed as a gun that would dominate the world of twenty-first-century handguns, but the gun lasted only four years on the U.S. market, from 1991 to its cancellation in 1994.

Kyle Mizokami is a defense and national-security writer based in San Francisco who has appeared in the Diplomat, Foreign Policy, War is Boring and the Daily Beast. In 2009, he cofounded the defense and security blog Japan Security Watch. You can follow him on Twitter: @KyleMizokami. This article first appeared in March 2018 and is being republished due to reader interest.