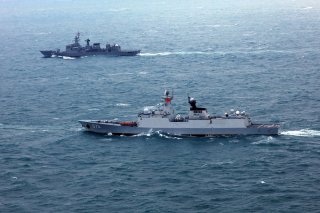 Here's What You Need To Remember: Even if Beijing has not perfected the accuracy of its various A2/AD missile platforms, Beijing “could compel the Aegis to exhaust its weapons inventory, leaving it defenseless against further PLA actions.” One could see a strategy that “used in conjunction with conventional ballistic missile strikes against US bases and other land targets across Asia — strikes that would elicit more intercept attempts — ASBM raids could deprive the United States and its allies of their staying power in a sea fight.”

The United States Navy seems under siege from all sides when it comes to its inability to project power in Asia — thanks largely to the People’s Republic of China’s investment in various anti-ship weapons platforms.

Considering the challenge presented by China today, while not even factoring in the daunting nature of future threats that seem just over the horizon, US naval planners seem to have their work cut out for them.

Take for instance the most obvious example: the threat such weapons pose to America’s mighty aircraft carrier. The carrier is the very symbol of Washington’s power and influence around the world. Unfortunately, the US “flattop” seems to be under constant attack time and time again in article after article, report after report, for their inability to counter the growing threat of anti-ship weapons that can be launched from land, sea and air by Beijing.

From there, things get even worse. The mighty US Navy’s surface fleet, the protector of the global commons and trillions of dollars of international commerce, has its own problems with being unable to counter the sheer types and amounts of Chinese anti-ship weapons. While putting aside land or air-based weapons for the moment, where the challenges are certainly daunting, America’s surface fleet also suffers from a lack of firepower and range to counter Chinese naval anti-ship weapons — something it took for granted after the Cold War as no peer competitor appeared over the horizon.

Beijing has taken advantage of this strategic mistake, and developed a number of naval-based anti-ship weapons with a much greater range and level of sophistication. At present, despite tremendous strides in the last few years to correct this problem, America’s surface fleet is largely out-ranged — sometimes referred to by many naval experts as “outsticked”– and in many respects simply outgunned by China on the high-seas.

And then there is the other anti-ship weapons threats we don’t talk about enough that threaten the overall US Navy in Asia. For example, China has developed over 80 Type 022 Missile Boats, sometimes also referred to as the Houbei class. While these smaller vessels — described in last year’s 2015 US Department of Defense report on China’s military as “wave-piercing catamaran missile patrol boats” — might not be as sexy or sophisticated as Beijing’s so-called anti-ship “carrier-killer” missiles, such vessels give China a unique ability to attack enemy surface combatants of many different types along the coast thanks to a large compliment of onboard anti-ship weapons.

When all of these different challenges to US carriers and surface combatants — really any US naval vessel — in Asia are combined, which is Chinese strategy all along, an interesting threat dynamic emerges.

China has the ability to launch anti-ship strikes with cruise and ballistic weapons from land, air and sea, and from ranges as far as possibly 2,500 miles away. US Carrier Strike Groups, in a crisis, would need to fight their way into a contested theatre of operations in the South China Sea, in and around Taiwan or around the East China Sea.

Beijing would be able to launch massive swarms of different types of anti-access/area-denial (A2/AD) missile platforms at US naval assets. With China sporting many more missiles of various types than US defense officials could defend against, Beijing would seemingly be able to deliver multiple mission kills against US naval vessels.

In fact, some researchers, like Toshi Yoshihara, note that China may not need to produce mission kills against a surface fleet to complicate US strategy.  He explains that Chinese missiles, especially advanced anti-ship ballistic missiles, “only need to reach the fleet’s defensive envelope for the Aegis [America’s naval based missile defense system] to engage the incoming threats, thus forcing the defender to expend valuable ammunition that cannot be easily resupplied at sea under combat conditions.”

Even if Beijing has not perfected the accuracy of its various A2/AD missile platforms, Beijing “could compel the Aegis to exhaust its weapons inventory, leaving it defenseless against further PLA actions.” One could see a strategy that “used in conjunction with conventional ballistic missile strikes against US bases and other land targets across Asia — strikes that would elicit more intercept attempts — ASBM raids could deprive the United States and its allies of their staying power in a sea fight.” Even if Washington decided to press ahead, and was willing to take on tremendous casualties, Beijing could deploy its sizeable surface assets, like the Type 022 mentioned above — knowing they could outrange the US fleet at present.

While the above is certainly a nightmare scenario, it is not a new tactic in naval warfare or revolutionary. Such A2/AD-styled, missile-based, swarm-style strikes were considered by the Soviet Union during the Cold War. Iran is thinking along the same lines today as it develops its own A2/AD-based strategies and weapons platforms along with possibly Russia as Moscow works to modernize its military.

US naval commanders must work to develop strategies and tactics to negate this growing threat — a challenge that only looms larger everyday as China continues to push out its A2/AD envelope into the South China Sea and beyond.

Harry Kazianis (@grecianformula) is a Senior Director at the Center for the National Interest. Kazianis is the author of the monograph The Tao of A2/AD, now available on Amazon.