Is Sweden's Blekinge-Class the Quietest Submarine in Europe? 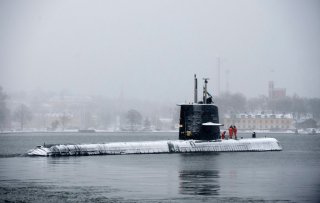 Here’s What You Need to Remember: Saab says the Blekinge-class is resistant to mines and depth charges for greatly improved survivability. Full-scale shock tests were conducted using depth charges just feet away from the hull—with a full crew aboard—to ensure both onboard electronics and the hull’s resistance to shocks.

Saab’s Gotland-class recently enjoyed a refit, and is very quiet—the U.S. Navy even leased the first of the class, the HMS Gotland for two years in order to evaluate the sub’s capabilities and to improve their own anti-submarine techniques against a peer adversary. The Gotland-class is very stealthy, but pales in comparison to Sweden’s upcoming Blekinge-class, represented by two hulls, the HMS Blekinge and HMS Skåne.

Saab’s Ghost stealth technology, which stands for Genuine HOlistic STealth, is Saab’s quietest technology ever—and even quieter than their upgraded Gotland-class submarine. This incredibly low acoustic signature is achieved through a variety of means. The Blekinge-class makes use of rubberized mounts and baffles inside the submarine to reduce noise cause by on-board machinery or crew. Additionally, frames within the sub are filled with “acoustic damping plates” that absorb ambient sound from within the submarine.

Additionally, Saab claims that all interior surfaces are optimized to minimize noise, including “flexible hoses and compensators; and specifying maximum flow speed in air ducts, minimum bending radius on cables and pipes, and the design of out-board holes and cavities.”

The submarine’s exterior is also optimized for reduced noise. Saab says that the Blekinge-class uses a new hull shape and fin design that reduces hydrodynamic noise caused by water flowing along the hull surface and fins. Amazingly, the sub’s radar cross-section has also been taken into consideration and reduced through a careful mast design.

In addition to above mentioned silencing features, perhaps the most significant is the Blekinge-class’ air-independent power technology. While the Blekinge-class is non-nuclear, it leverages a Stirling engine to remain submerged for longer than would otherwise be possible with conventional diesel generators.

Though complex, the Saab explains how the Stirling engine works, “in a Stirling engine, the necessary heat is produced in a separate combustion chamber and transferred to the engine’s working gas, operating in a completely closed system. The working gas forces the pistons in the engine to move, thus producing mechanical energy.” The Stirling engine is both more efficient, and has a very low acoustic and infrared signature.

It burns a mixture of liquified oxygen and diesel—the same diesel that onboard diesel generators use. These generators are used just for “long distance transit at medium speed in either a surfaced or snorting condition.”

Saab says the Blekinge-class is resistant to mines and depth charges for greatly improved survivability. Full-scale shock tests were conducted using depth charges just feet away from the hull—with a full crew aboard—to ensure both onboard electronics and the hull’s resistance to shocks.

Thanks to the high level of thought given to the class’ design, the Blekinge-class could be one of the quietest submarine class ever built once they’re finished.

This article first appeared in May 2020 and is being reprinted due to reader interest.