Take a Look at the Cold War's "Caspian Sea Monster" 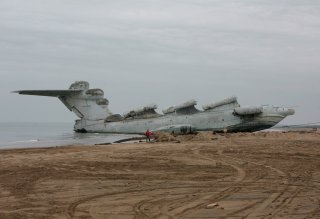 Here's What You Need to Know: There have been rumblings that there could be interest in building new ekranoplans, but no firm progress yet.

Between the 1960s and the early 1990s, the Soviet and Russian navies flew a handful of huge, bizarre, sea-skimming hybrid aircraft they called ekranoplans.

Decades later the public got its first close look at one previously obscure example.

Too big and heavy to fly high, the ekranoplans rode a buoyant cushion of air fewer than 100 feet from the sea surface, at speeds greater than 200 miles per hour. Engineers call that the “wing-in-ground effect.”

Two of the multi-engine giants carried missiles for strikes against NATO warships. One example, weighing 600 tons fully loaded, so startled and perplexed NATO analysts when it first appeared in 1966 that they dubbed it the “Caspian Sea Monster.”

The Lun class of ekranoplans—400 tons, eight engines—debuted in 1987 and included two examples. The first served as a missile platform in the Black Sea before retiring in 1992. That craft now languishes in open storage.

The second, dubbed Spasatel or “Rescuer,” was still under construction when the Soviet Union collapsed. Work ended. And for more than two decades Spasatel remained mostly unseen.

The Website Russia English published a striking photo essay by an anonymous team that sneaked into the shipyard where the incomplete Spasatel rested, in amazingly good condition despite her years.

As her name implies, Spasatel “was planned to be used at shipwreck sites for bringing boats on its wings for rescuing people,” English Russia noted. “Also there is a place for doctors and medical equipment on board.”

English Russia claimed Spasatel might wind up in a museum some day. “However, as of now, those who want to take a look at this ekranoplan have got to sneak illegally into this dock.”

Ekranoplans could make a comeback.

In 2017, Russia’s JSC Central Design Bureau announced it was developing a new ekranoplan for Arctic search-and-rescue and supply operations, with a potential fielding date in the mid-2020s.

“We are talking about creating a basic platform under the working name Rescuer,” the bureau stated, adding that it had received requirements from the Russian navy’s commander-in-chief.

The new ekranoplan would have a 230-feet wingspan, a loaded weight of 600 tons and a range of more than a thousand miles. “The decision in favor of a large-sized ekranoplan was made because such vehicles can fly with [high] sea waves,” JSC Central Design Bureau explained.

“Ekranoplans are much more economical than airplanes,” naval expert Alexander Mozgovoy told Izvestia. “It will be possible to quickly transfer more cargo to a greater distance. If they can equip their chassis with an air cushion, they can even land on snow hummocks.”

Of course, it’s one thing to talk about a new military aircraft design and another thing actually to develop it. Three years after the design bureau’s announcement, there is no firm evidence that Rescuer actually is taking shape.

It’s possible that the rusting hulks, leftover from the Soviet days, are the only ekranoplans anyone will see for the foreseeable future.