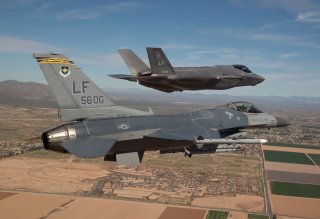 In February, the Loyal Wingman finally took flight in Australia. A pilot-less, stealthy aircraft designed to operate alongside manned fighters, the drone exemplifies what may be a better approach to military innovation: rapidly delivering large numbers of advanced capabilities cheaply and doing so in a way that augments the legacy force, not simply replacing it.

Flying at the Woomera test range in South Australia, the 38-foot long, Boeing-developed drone completed its first pre-planned flight path without incident. The bantam-size fighter would fly alongside the Royal Australian Air Force's fourth- and fifth-generation aircraft, like F-18Fs or F-35s, armed with sensors, missiles, or other payloads and guided by AI-assisted autonomous flight technology. And it would team with other Wingmen to support the piloted plane or fighter in executing its operation. The other models in development around the world, like the U.S. Air Force's Skyborg program, currently in prototyping, and the United Kingdom’s own "Novel Combat Aircraft," would operate similarly.

Together these programs represent an alternative to the current model of military modernization and innovation. For years, defense planners have pursued world-class, high-tech capabilities that would offset enemy weapons and systems. But their pursuit of silver bullets for the wars of the future left us unprepared for the wars of today and the immediate years ahead—a pattern seemingly reinforced by the recent budget request.

While R&D is vital for maintaining the military's edge, we need to do more in the near term to translate technological advances into fielded weapons and as large a scale as possible. We may never close the gap between the rate of technological evolution and that of the military, but we can narrow it. We can think about continual innovation rather than long, multi-decade cycles of modernization. We can focus on bringing new concepts into the field as they become available and having them complement, not replace existing weapons. And we can remember that even the most high-end aircraft can only be in one place at a time. There is no substitute for quantity.

The loyal wingman concept fits the bill: it is cheap; can be fielded in large numbers; and complements existing platforms and personnel.

To begin with, it offers a good bang for the buck. Unlike the manned aircraft they would support, these platforms come relatively cheap. Australia recently inked a contract for three more for $115 million. Today’s unit cost of an F-35A is $80 million, with the Pentagon planning to spend $12 billion to purchase 85 more. It’s not rocket science to imagine in the near future being able to buy swarms of stealthy, high-end aircraft for far less—perhaps one-tenth less. Given predicted defense budget constraints, that’s a valuable return on investment.

If successfully developed, Wingman programs could also provide large quantities of high-end platforms. They bring to bear advanced stealth and autonomy and will likely carry a range of combat necessary payloads. Their role could also evolve with time as developers strengthen and mature the AI-enabled operating systems. And thanks to their low cost, they could be bought at scale and fielded en masse.

They would likewise help extend the valuable service life—and increase the effectiveness—of existing aircraft. Pairing with a complement of stealthy wingmen means fewer 4th-generation aircraft would routinely be needed for missions like homeland defense. Or, if the wingmen were used as leading-edge scouts, the legacy fighter would conceivably be more survivable in a contested space. Imagine allies, who cannot afford a fleet of 5th-generation aircraft, let alone 6th-generation fighters, now fielding a swarm of stealthy, unmanned drones to accompany their few high-end fighters.

This is not an argument for not buying F-35s or F-15EXs. Rather, these wingmen drones would help them take full advantage of their suite of sensors and communications capabilities. They would, literally, mean “more bang for your buck.”

Moreover, these programs would reduce the load on pilots, allowing them to do more with each flight hour—and increasing the inventory of aircraft without recruiting more pilots, which would both save money and help address the ongoing pilot shortage. And, even more significantly, the loss of a wingman in combat does not mean the loss of a pilot.

Finally, in its various international iterations, the loyal wingman concept embodies the promise of greater allied investment and cooperation. Australia leads the way at present. It is fielding offers from foreign countries to join the program. The Pentagon and the Air Force should see the Boeing program there not as a challenge to its own programs but as a potential strategic asset, unburdened by the plethora of regulations that guide and restrict technological cooperation and sales to even allied states.

An autonomous drone in Australia will not revolutionize military affairs. But it is an example of the kind of military innovation the United States needs if it hopes to build a more modern and capable fighting force—one that gives us high-tech weapons in numbers without reinventing the wheel.

Gary Schmitt is a resident scholar at the American Enterprise Institute. James Cunningham is an associate at Bridgewater Associates. The views expressed are the authors’ alone.