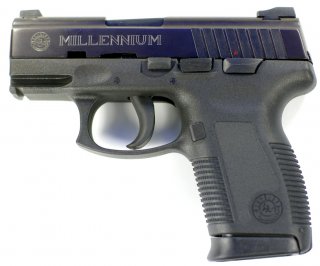 Here's What You Need to Remember: Part of what makes the G2S so user-friendly is its low recoil and great balance. In part, this is due to its small size and weight, but the overall design of the gun also helps. The finger-rest extension on the magazine allows for a better hold of the gun. When combined with the texturing and functional design of the grip, this results in enhanced recoil management.

If you are a long-time gun owner, you probably had one of Taurus’ Millennium Pro Series as one of your first guns. They’re easy to conceal and have great firepower and accuracy for their size. Given this, it’s no surprise that the PT-111 Millennium G2, also known as the Taurus G2S, stands out as an excellent first-time pistol.

For its size, the G2S is quite accurate. It comes with large, three-dot sights—a fixed front sight and two-dot rear sights that offer the ability to adjust the windage and elevation using the provided safety key/screwdriver. The sights are easy to line up while aiming.

The sights were built to be small to prevent snag. However, this makes them less than ideal for aiming in low-light conditions. For those situations, I recommend getting a red dot sight or a scope to compensate for this. Also, due to the dots being painted on, they are vulnerable to the kinds of caustic substances found in cleaners, so be wary when you are cleaning the gun.

The Taurus G2S can fire hundreds of bullets with only factory lubrication without a single hiccup. Suffice to say, its reliability is excellent. The polymer frame of the gun is as sturdy as metal, if not more so.

A unique feature of this gun is its second-strike capability. If the primer fails to ignite, the gun switches to a double-action mode, allowing you to pull the hammer again. This means that failing to detonate once will not impede the use of the weapon, making the G2S invaluable in a dire situation.

The Taurus Millennium G2 has above-average handling. There is next to no ejection or feeding issues with it, and the textured grip and smooth trigger make it much easier to handle. The trigger guard is small enough to accommodate gloved hands.

The Taurus G2S is a gun meant to be used for self-defense, and the trigger is proof of this. There is a lot of bring-up on the trigger of this gun, but, once the trigger is brought up, you don’t have to pull it hard. The trigger press is around six pounds, allowing for the gun to fire easily and accurately. It may not be as good as something like a Walther PPQ, but it’s still a good choice.

Unlike some older guns, this gun’s factory magazines are perfectly serviceable. The gun has no ammunition requirements, and it’s easy to take down and clean, even if you are new to using guns.

Though most would associate the Taurus with larger, cheaper handguns, this gun is a well-crafted, compact polymer handgun. Its barrel is 3.2 inches in length, and its overall length is 6.24 inches. Those who hear that the G2S is a double-stack gun are surprised to find that it’s one of the narrowest ones out there; it’s barely over an inch in width. The G2S weighs twenty-two ounces with an empty magazine. Though it’s too bulky to carry in a pocket, it’s the ideal pistol to carry on a belt.

Part of what makes the G2S so user-friendly is its low recoil and great balance. In part, this is due to its small size and weight, but the overall design of the gun also helps. The finger-rest extension on the magazine allows for a better hold of the gun. When combined with the texturing and functional design of the grip, this results in enhanced recoil management.

The Taurus G2S usually costs between $320 to $350, though its street price can be as low as $250. Considering all the features above, and comparing it to its competitors, this is a steal. Even other Taurus guns aren’t as inexpensive. You are getting a gun that can compete with any of the other 9 mm pistols on the market at a much better price. This makes the gun a good choice for your first pistol.

The Taurus G2S is a handgun that’s easy to carry and is a decent weapon for self-defense. Its easy-to-use trigger, good size and weight, comfortable grip texture, and rounded edges all make it an excellent concealed carry weapon. It’s guaranteed to be a bang for your buck.

Richard Douglas is a long time shooter, outdoor enthusiast and technologist. He is the founder and editor of Scopes Field. Columnist at The National Interest, Cheaper Than Dirt, Daily Caller and other publications. This article first appeared earlier this year.