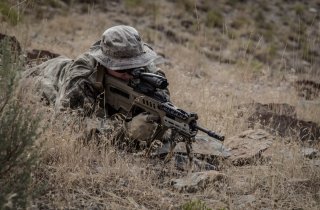 Key Point: The Tavor primarily fires NATO 5.56 x 45 millimeter rounds, though it can also shoot 9-millimeter ammunition. The weapon is just 25 to 28 inches long, and weighs 7 to 8 pounds, depending on the model.