This Technology Helps U.S. Army Soldiers Look In Two Directions at Once 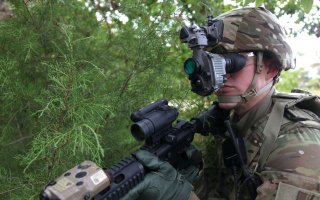 Here's What You Need to Know: These new night vision optics could be a game changer.

The goggles and thermal sights produced by DRS Technologies and BAE Systems on display at the July 2017 Program Executive Office Soldier media demonstration are part of a new platform of optics the Army has been working and building toward for more than a decade, and they literally allow a soldier to look in two directions at once.