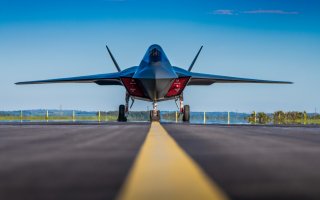 Here's What You Need to Know: The Tempest fighter is being built around an ambitious new radar system that will likely rival the F-35 in versatility and technical sophistication.

As the Royal Air Force’s (RAF) upcoming Tempest fighter inches closer to a finalized design, the next generation of British airpower doctrine begins to take shape.

What We Know Now:

It was later revealed that the Tempest fighter is being built around an ambitious new radar system that will likely rival the F-35 in versatility and technical sophistication. Tempest’s Multi-Function Radio Frequency System (MFRFS) will support advanced electronic countermeasure (ECM) features, including offensive jamming and false target signals.

Like the F-35’s radar package, the Tempest’s MFRFS will be able to collect reliable data at a rapid pace. According to defense contractor Leonardo UK, the data collection process will be “four times as accurate as existing sensors in a package 1/10th the size.” Information on everything from enemy aircraft movements to ground infrastructure layout will then be filtered through an onboard sensor suite, painting a dynamic picture of the battlefield. At least some of that information can apparently be fed to nearby friendly units through a shared communications network, though the full extent to which the Tempest will be able to serve as a flying command and control center remains unclear.

The Tempest is envisioned as a cost-conscious and modular platform, capable of being easily reconfigured for a wide range of missions. The Tempest’s armaments loadout will, likewise, prioritize interchangeability with the seamless integration of future weapons; as defense firm MBDA’s UK Director of Sales and Business Development Mike Mew put it, fitting the tempest with upgraded weapons should be “as simple as plugging a USB stick into your computer… each generation has been more complex and cumbersome, we need to break out of that.”

One of the biggest developments from the Tempest’s earlier iterations in 2019 is the further conceptual progress made in BAE Systems’ “wearable cockpit” technology, replacing physical analog/digital inputs with augmented reality (AR) display technology while also introducing an AI-powered assistant to handle some of the pilot’s functions. It is unknown if the first serial Tempest units will ship with wearable cockpit compatibility, or if these features will be added later in the form of subsequent upgrades.

A clear design focus on versatility may aid in the manufacturers’ export ambitions, though the Tempest’s export prospects will largely hinge on the extent to which it can be cost-effectively mass-produced over the coming decades. Britain remains the only “level 1” parent in the F-35 program, with the RAF and Royal Navy committed to acquiring a whopping 138 F-35 units. Procuring that many F-35’s while simultaneously developing and serially producing the Tempest fighter will prove an extraordinarily steep investment for Britain’s defense sector. It remains to be seen if the Tempest can be finalized and produced in militarily meaningful numbers by its Initial Operating Capability target of 2035.