Thank Joe Biden: You May Qualify for $16,000 in Stimulus Payments 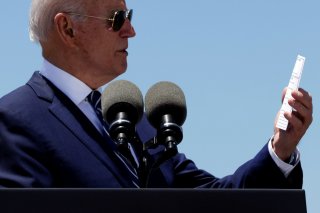 Here's What You Need to Remember: In order for dependents to qualify for the credit, the IRS says that they must have a tax identification number, such as a Social Security number, be under the age of 13 or are unable to care for themselves if they are 13 or older.

All child care services paid for in 2021 can be claimed as tax credits, a sweeping family benefit featured in the American Rescue Plan that’s separate from the child tax credit payments.

The provision indicates that parents, depending on their income level, can claim up to 50 percent of childcare-related expenses like daycare, nannies, camp, and transportation costs. They can claim up to $8,000 for one child and $16,000 for two or more dependents.

The child and dependent care credit was crafted for parents to claim childcare-related expenses throughout an entire year, so it is encouraged to start gathering information now to fully claim the credit for next year.

In the past, the maximum amount that a parent could claim for multiple children was $6,000. Under President Joe Biden’s relief package, parents can see up to $16,000 in child care expenses for more than one child—and that still excludes any child tax credit payments.

It’s still unclear what child care expenses qualify for the massive tax relief due to the law’s wonky rules. But, the key component of an expense is that it must provide care for the dependent as long as it’s being paid for.

The Internal Revenue Service has reportedly eased their guidance over what qualifies, according to a research associate at the Urban Institute, but parents will likely have a stronger chance of writing off a daycare program than a babysitter who’s watched their kid for a few hours.

But the child and dependent care credit can’t be claimed until parents file their 2021 taxes, so economists have suggested to maintain a file of all child care expenses including receipts and other forms of documentation. Then, parents will complete Form 2441 and attach it to the Form 1040 tax return.

Households who are eligible for the tax credit must have an adjusted gross income of up to $125,000. If the income is above that threshold, then the tax credits will phase out at 50 percent. So, instead of receiving the full $8,000 for one child, the household would get $4,000.

In order for dependents to qualify for the credit, the IRS says that they must have a tax identification number, such as a Social Security number, be under the age of 13 or are unable to care for themselves if they are 13 or older. The dependents could also be physically or mentally unable to care for themselves, even if they have a reported income at or above $4,300.

The child and dependent care credit is different from the child care tax credits that will start being sent out by the IRS in July. The enhanced credits were established under Biden’s stimulus law, which boosted the original credit from $2,000 to $3,000 and allowed parents with children under the age of 6 to qualify for $3,600.