Thanks To ISIS, The Middle East Looks At Armored Cars With Fear 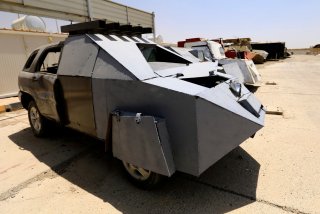 Here's What You Need To Remember: Troops combatting ISIS and other radical groups will certainly need to give thought to appropriate countermeasures such as ensuring infantry are equipped with anti-tank weapons or are backed up by more heavily armed armored vehicles that can knock out a kamikaze truck before it hits, as well as using small drones and other surveillance systems to systematically scan side streets for suicide trucks lying in wait.

In the early 2000s, the video game Command & Conquer: Generals included a playable terrorist faction which could build kamikaze suicide trucks from factories to blow up opponents on the cheap. At the time the concept struck the author as not only a distasteful caricature but also simply ridiculous. After all, if you’re strong enough to have factories, why would you expend lives and vehicles on suicide attacks?

But years later, however, armored kamikaze trucks—also known as VBIEDs, for Vehicle-Based Improvised Explosive Devices—were mass-produced and used on an industrial scale by the Islamic State in Syria and Iraq. And these suicide trucks were no cartoonish joke, maiming or killing thousands of people in Iraq and Syria.

Suicide bombers have been called “poor man’s cruise missiles”—an attempt by lightly armed insurgent groups to deliver massive and relatively precise firepower against their enemies using non-military resources that can be easily scrounged.

ISIS efforts with VBIEDs intended to give them (human) guidance, make them deadlier (by carrying hundreds of pounds of explosives) and harder to stop by incorporating heavy armor plates.

Parked truck bombs are of course an old and lethal ploy used both in terror attacks targeting civilians as well as by insurgents to ambush routine military patrols.

However in the context of battlefield operations, it becomes difficult to arrange for enemy troops to approach within lethal range of a truck bomb. Thus the morbid intent of giving the trucks human pilots who could crash them directly into enemy troop positions.

During the Iraq war, Al Qaeda used SVBIEDs disguised as ordinary civilian traffic to spring ambushes. A useful side-effect from the insurgent’s perspective is that truck bombs increased the paranoia of U.S. and Iraqi forces towards ordinary civilian vehicles. This in turn increase the odds that they would open fire on and kill confused or nervous civilians at checkpoints by accident, thereby increasing support for the insurgency.

But still, the ability of rifle and machine gun fire to tear through ordinary civilian cars, kill drivers and knock out engine blocks reduces the odds of a SVBIED of striking a military target. This was especially true after Al-Qaeda in Iraq’s future evolution, ISIS, switched from insurgency to offensive conventional operations after capturing large swathes of territory and equipment first in Syria, and then in its native Iraq.

That’s were bolt-on armor sufficient to render most infantry weapons ineffective, leaving only heavy machineguns or anti-tank weapons with a chance of stopping the attack. Slat or ‘cage’ armor was also installed on some vehicles to prematurely trip the shape-charged warheads found on most infantry anti-tank rockets, as you can see in this video.

ISIS’s exceptionally fanatical and bloody-minded ideology, wedded to a global propaganda network, attracted numerous fighters both domestically and abroad who were willing to sacrifice themselves in service of the group’s genocidal and theocratic vision.

In a manner reminiscent of the rituals surrounding Japanese Kamikaze operations, ISIS fighters about to strap themselves into their armored death trap often recorded videos in which they gave religious speeches before departing on their one-way mission. ISIS video producers than stitched together the speeches with footage of the attack to make slick propaganda videos.

You can see in this hair-raising video Kurdish troops unleashing everything they have at a kamikaze truck barreling towards them. Finally someone fires a hi-tech infrared-guided Javelin anti-tank missile, apparently transferred to them by U.S. special operations forces. The truck explodes, but its flaming wreck rolls over a hundred meters further on sheer momentum.

In another incident, an ISIS VBIED was knocked out by Iraqi tank main gun fire. However, VBIEDs also have destroyed armored vehicles by ramming into them and detonating. A terrorist SVBIED attack in Egypt, however, came to an unusual end when it was heroically run over by a Egyptian Army tank, buying time for bystanders to flee before the explosives inside detonated.

On some occasions, entire squadrons of SVBIEDs would barrel at maximum speed towards a fixed defensive position, physically blasting breaches into entrenched defensive lines. As defending troops struggled to penetrate their armor, they sometimes fled in disarray.

In one notorious incident in May of 2015, the commander of Iraqi forces in Ramadi panicked after his frontline positions were obliterated by a succession of suicide Humvees attacks that were masked by a sandstorm, which also disrupted his radio communications and air support. His withdrawal allowed ISIS to capture a city of over 200,000 people, hundreds of whom would die during the ISIS occupation, and thousands more in a lengthy battle to retake the city.

However, as Coalition airpower and Iraqi and Kurdish ground troops forced ISIS to go on the defensive in 2016, the murderous de facto state turned to ambush tactics instead. 816 ISIS SVBIEDs were destroyed in 2016 alone, at a rate of nearly three per day.

The preferred method was to conceal a suicide truck on a cross street perpendicular or at a slant to the advancing enemy ground forces. Once the Iraqi or Kurdish troop shad began passing the side street, the SVBIED driver would floor the gas pedal approaching from the side or rear. The unfortunate victims would be left with too little time to train heavy weapons on them before the deadly moment of impact.

This video shows the terrifying suddenness of a suicide truck attack during the exceptionally long and bloody Battle of Mosul, which lasted nine months and resulted in the deaths of over 16,000 ISIS fighters, 1,400 Iraqi and coalition troops, and around an estimated 10,000 civilians.

ISIS’s suicide trucks failed to prevent the destruction of its de facto state spanning across Iraqi and Syrian territory. But they proved horrifyingly effective and exacted a terrible toll on both civilians and soldiers.

While the willingness of a person to destroy themselves for such a vile cause is hard to understand, from ISIS’s perspective it traded resources it had relatively abundant access to (fanatical followers, expendable civilian vehicles) to inflict disproportionate damage on heavily armed government forces.

The ‘tactical formula’ of the armored suicide truck has been and will continue to be reproduced by other insurgent groups, though the unusual context which allowed ISIS to mass produce them will not always be present.

Nonetheless, troops combatting ISIS and other radical groups will certainly need to give thought to appropriate countermeasures such as ensuring infantry are equipped with anti-tank weapons or are backed up by more heavily armed armored vehicles that can knock out a kamikaze truck before it hits, as well as using small drones and other surveillance systems to systematically scan side streets for suicide trucks lying in wait.

Sébastien Roblin holds a master’s degree in conflict resolution from Georgetown University and served as a university instructor for the Peace Corps in China. He has also worked in education, editing and refugee resettlement in France and the United States. He currently writes on security and military history for War Is Boring. This first appeared in 2019.