Thanks, Russia: Is This the Most Popular Tank in Military History? 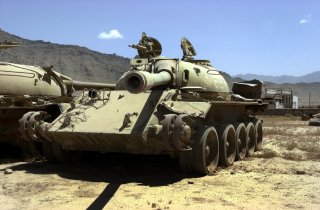 Here's What You Need to Remember: The T-54/55 continues to serve in active duty or in the reserve inventories of many countries around the world, especially among state and non-state actors that do not have the resources to buy newer, more technologically advanced equipment.

Caleb Larson is a Defense Writer with The National Interest. He holds a Master of Public Policy and covers US and Russian security, European defense issues, and German politics and culture. This article first appeared earlier this year and is reprinted due to reader interest.