Thanks to Russia, Ukraine’s Only Sub Is No More 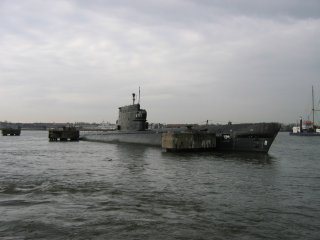 Here's What You Need to Remember: Half of Zaporizhzhia’s crew—perhaps forty sailors—opted to join the Russian navy, according to the March 22, 2014 report. The other half, including the captain, left the vessel. They left behind a vessel that had spent most of the last quarter-century in disrepair—and would never deploy again.

But for Moscow, capturing Zaporizhzhia was more a symbolic victory than a practical military one. The 1970-vintage Foxtrot-class submarine was barely functional. That’s why five years later in the summer of 2019, the Kremlin offered the ex-Ukrainian sub to scrappers.

The Russian Black Sea flotilla, which previously included just a single Kilo-class submarine—a fairly modern design—shares facilities with the Ukrainian navy owing to a lease deal dating to the mid-1990s. That deal is now moot, as Moscow effectively controls the entire Crimean peninsula.

In mid-March 2014, the occupiers invited Ukrainian troops in Crimea to join Russia. Many did, and on that pretense, Moscow reportedly claimed fifty-four of the Ukrainian navy’s sixty-seven vessels, including Zaporizhzhia. Kyiv remains in control of its most modern warship, the frigate Hetman Sahaydachniy, which was on an overseas deployment when Russia invaded.

Leaving aside the new prize vessels, Russia Black Sea Fleet includes two cruisers, a destroyer, several frigates and corvettes and the Kilo sub—a much more powerful force than Ukraine’s. But that’s not to say the aged, poorly-maintained Black Sea flotilla is in good shape. “It’s not a particularly powerful force,” Mark Galeotti, a professor at New York University, told The Washington Post.

Adding Ukraine’s even older and rustier ships did not improve the Black Sea Fleet’s condition. In fact, they made the flotilla’s problems worse, by saddling the Russian navy with a larger numbers of ships badly in need of expensive repairs.

Zaporizhzhia was a perfect example. After commissioning with the Soviet Northern Fleet in 1970, the Foxtrot-class diesel sub spent twenty years patrolling the Atlantic. She was likely already in bad shape when, in 1990, Moscow transferred her to the Black Sea Fleet. Her batteries failed in 1995.

In 1997, Russia gave the inoperative boat to Ukraine as part of the Sevastopol base-sharing deal. It took six years for Kyiv to be able to afford to buy new batteries. But Zaporizhzhia was rusting away from neglect. She spent another nine years in a Sevastopol shipyard, slowly undergoing repairs.

The sub finally returned to sea briefly in the summer of 2012. But by then, Ukraine had lost its ability to train competent submariners. “It should be admitted that the Ukrainian navy no longer has specialists suitable for submarine service,” a navy official told RIA Novosti. He proposed that Kyiv request Russian assistance.

Half of Zaporizhzhia’s crew—perhaps forty sailors—opted to join the Russian navy, according to the March 22, 2014 report. The other half, including the captain, left the vessel.

They left behind a vessel that had spent most of the last quarter-century in disrepair—and would never deploy again.