These 5 Airplanes Benefited from Aircraft Carriers 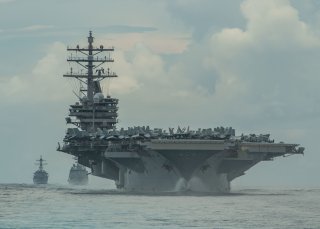 Here’s What You Need To Remember: Designing an airplane that can fly at high speeds lugging heavy weapons loads, and yet still take off and land on a short flight deck a few hundred meters long has always posed a formidable engineering challenge. Sea-based fighters typically feature folding wings for easier stowage, ruggedized landing gear and arrester equipment, and greater robustness to endure the wear and tear from sea-based operations. These all literally weigh against the exquisite engineering exhibited by land-based fighters.

To qualify for this list, the carrier-based-fighter in question must not only have been effective but also had a significant operational impact. This excludes excellent carrier-based jets such as the Super Hornet or Rafale-M which haven’t seen intensive combat employment.

The A6M Zero was an elegant fighter designed for the Imperial Japanese Navy by engineer Jiro Horikoshi. Weighing less than 4,000 pounds. The Zero’s 840-horsepower radial engine allowed it to traverse a remarkable 1,600 miles on internal fuel, outclimb and outrun many contemporary land-based fighters with a top speed of 346 miles per hour, and still turn on a dime.

However, the Hellcat itself was outlived by the even higher-performing F4U Corsair. The Corsair is notable for its unique gull-winged design, but difficulties landing the “Hogs” caused the Navy to delay its introduction into service—so the Marines snatched them up instead. The Corsair quickly proved so successful that both the U.S. and Royal Navies adopted it into service.

The Corsair’s powerful Double Wasp engine made it fast and deadly, scoring an 11:1 kill ratio versus Japanese fighter pilots, who nicknamed it the “Whistling Death.” It played a vital role in intercepting Kamikaze attacks and providing ground support for Marines in Iwo Jima and Okinawa using napalm canisters and high-velocity rockets.

Though both powered by similar turbojets based on the Rolls Royce Nene, the straight-wing F9F could only attain 620 miles per hour, compared to the 670 mph of the swept-wing MiG-15. However, that didn’t prevent a lone F9F pilot from downing four Soviet MiG-15s in a whirling air battle over the Sea of Japan in 1952. Like the best naval fighters, the F9F also evolved gracefully over time, developing into a higher-performing swept-wing model called the “Cougar.”

There have been many variants of the Harrier built by the various manufacturers, but their basic appeal was always the same: their vector-thrust turbofans allowed them to take off and land vertically like a helicopter from the deck of a small amphibious carrier or a remote forward bases lacking traditional runways.

Despite its flaws, the Phantom proved you could combine speed, heavy payload, advanced sensors, and (eventually) decent agility in one large airplane, a principle which informs modern fourth-generation jets such as the currently-serving FA-18E/F Super Hornet.

Sébastien Roblin holds a master’s degree in conflict resolution from Georgetown University and served as a university instructor for the Peace Corps in China. He has also worked in education, editing, and refugee resettlement in France and the United States. He currently writes on security and military history for War Is Boring. This article was first published in 2019.