These 5 Cold War Warriors are Still ready for a Fight 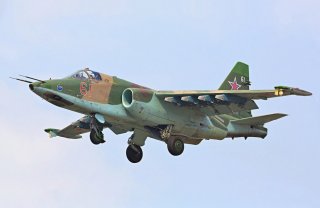 Here's What You Need to Remember: Exceptionally maneuverable and very heavily armed, the Su-35 has the potential to tangle with the best Western aircraft.

In 1990, the air forces of the Soviet Union consisted of over ten thousand aircraft, excluding those operated by the Soviet Army (mostly helicopters). This included not only the Soviet Air Force proper, divided between Frontal Aviation, Long Range Aviation, and Military Transport, but also the Soviet Air Defense Command, and Soviet Naval Aviation.

Together, these forces could support the advance of the Red Army, conduct strategic nuclear combat against the United States, interdict Atlantic and Pacific shipping lanes, and protect the Soviet homeland.

Times have changed. The Soviet air forces were divided among the Soviet successor states, then downsized dramatically in the economic collapse of the 1990s. What remains today is a force roughly a fifth the size of the Soviet air forces (estimates vary based on judgments about readiness), but that continues to operate the most lethal platforms of the late Cold War. This article examines five of those platforms.

Since the late stages of the Cold War, the Flanker family has presented an increasingly formidable problem for Western air forces. Developed as the heavy half of the high/low split that many air forces adopted in the 1970s and 1980s, the Flanker first entered service as the Soviet Union began to collapse.

Since then, the Flanker has proven a remarkably flexible platform, capable of accepting a wide array of modifications and improvements. The Flanker now serves as a carrier-based fighter in two navies, an air superiority aircraft, and a long-range strike aircraft.

The Su-35 represents the most lethal of the Flanker configurations. Exceptionally maneuverable and very heavily armed, the Su-35 has the potential to tangle with the best Western aircraft, even the F-22 Raptor. Currently, the Russian Federation operates 34 Su-35s, with another dozen on the way. Given the problems with the PAK-FA, it may remain the premier fighter in Russian service for some time to come.

The Tu-22M “Backfire” bomber was one of the “killer apps” of the Cold War, forty years before anyone knew what a killer app was. Designed as a medium-to-long-range strategic bomber, the Backfire found its niche as a platform for hunting aircraft carriers in massive packs.

A supersonic swept-wing bomber, the Backfire caused consternation in Western defense circles, as its purpose was not immediately apparent. This caused problems both in terms of national air defense (the Backfire could outrun, or at least outrange, many existing interceptors), and provided a huge challenge for fleet air defense.

Some ninety Backfires remain in service with the Russian Air Force, with perhaps another fifty still operating with Russian naval aviation. Apart from their maritime patrol role, Tu-22M have undertaken bombing and reconnaissance roles since the Afghan War. In a conflict between Russia and any meaningful opponent, they would still present a serious danger to naval forces.

The MiG-31 Foxhound, developed from the MiG-25 Foxbat, represents the apogee of Soviet Cold War interceptor design. Blessed with high speed, a powerful radar, and long-range, the MiG-31 resolved many of the glaring problems with its high-performance predecessor. It can effectively hunt Western aircraft along the Russian periphery, as well as into the Arctic. In particular, its high speed might make it extremely effective at hit-and-run sorties into NATO staging areas, delivering a disrupting attack before escaping back into Russian airspace.

The Russian Air Force operates around 200 Foxhounds, which continue to patrol Russian airspace and project Russian power into the Arctic. Russia plans to retire its remaining Foxhounds in the next fifteen years in favor of new aircraft, but given the difficulties of the Russian aircraft industry, the interceptor may continue to fly well into the future.

The venerable Bear, with all of its variants, strikes many as the most absurd of Cold War anachronisms. Initially developed as a strategic bomber in the 1950s, the lumbering Bear has adapted to numerous missions in the past six decades. Like the B-52, modern Bears have undergone extensive modification. They still play some of the same roles, however, including long-range reconnaissance, maritime patrol, and nuclear “presence.”

Of course, in all of their configurations Bears are extremely vulnerable to just about any kind of modern Western interceptor. In a conflict, we would expect Tu-95s to deliver cruise missile strikes against NATO targets from the safety of Russian airspace, as well as to conduct surveillance on the developing Western response to any action. Fifty-eight of an original 500 Bear bombers remain in service with the Russian Air Force (another twenty-four operate in the Tu-142 anti-submarine configuration for the Russian Navy).

The Soviet analogue of the A-10 Warthog, the Su-25 “Frogfoot” remains a devastatingly effective ground attack platform. Designed to attack NATO ground forces in Central Europe during a general Warsaw Pact offensive, the Su-25 has fought in numerous conflicts around the world. Over a thousand were built in the 1970s and 1980s, with about two hundred remaining in Russian service.

The Su-25 has turned in good service in Afghanistan, in the First and Second Chechen Wars, in the Iran-Iraq War, and in a variety of other conflicts associated with the decay and dissolution of the Soviet Union. Just in the last year, Frogfoots have played important roles in the international war against ISIS, as well as in the Ukrainian-Russian conflict. The performance of the Su-25 in the Ukrainian conflict revealed the vulnerability of the aircraft to modern surface-to-air weapons, as several Ukrainian Frogfoots were lost to Russia and pro-Russian militia forces.

All of these platforms entered service in the Cold War. Some, like the Tu-95, appeared quite early in the Cold War. This does not differentiate the Russian Air Force all that much from the various Western air forces, but it is surely problematic that Russia does not have an equivalent of the Rafale, the Eurofighter Typhoon, or the F-22 Raptor. Given the trouble with the PAK-FA program, and the frank implausibility of Russian promises on the PAK-DA bomber, these aircraft may remain in frontline service for quite some time. Apart from the wide array of Flanker variants, Russia’s aviation industry isn’t producing many of these for domestic consumption anymore. All of this means that, until the Russian economy and the Russian military-industrial complex get going in the same direction at the same time, the lethality of Russia’s air forces may continue to decline.

Robert Farley is an assistant professor at the Patterson School of Diplomacy and International Commerce. His work includes military doctrine, national security, and maritime affairs.He blogs at Lawyers, Guns and Money and Information Dissemination and The Diplomat. Follow him on Twitter:@drfarls. This article is being republished due to reader interest.