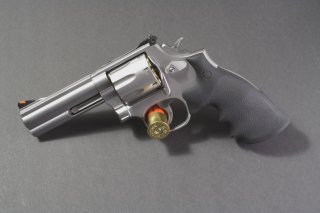 Here's What You Need To Remember: The patent on John Moses Browning’s 1911 handgun design ran out long ago, and nearly all gun companies now manufacture their own versions of this iconic handgun. Smith & Wesson is no exception, producing its own S&W1911 E-Series pistols. The pistols are generally true to the final version of the 1911A1, with the exception of stainless steel barrels, skeletonized hammers, and in some cases an accessory rail for the mounting of lights and lasers.