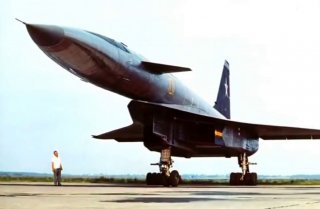 Here's What You Need to Remember: Many of the Soviet bombers of the post-war era were direct analogs to U.S. types.  The Tu-4, in fact, was a direct copy of captured American B-29s. The Sukhoi T-4 was the USSR’s answer to the B-70 Valkyrie.  A massive, incredibly fast bomber capable of high altitude flight, the T-4 tested (and in many ways exceeded), the limits of the Soviet Union’s defense industry.

No single weapon could have saved the Soviet Union, but several might have shifted the contours of its collapse. The relationship between technology and the “human” elements of war, including doctrine and organization, is complex.  Decisions about isolated systems can have far-reaching implications for how a nation defends itself.

As with last week’s list, weapons are often canceled for good reason.  Events intercede in ways that focus a nation’s attention on its true interests and needs, rather than on the pursuit of glory and prestige.  In the Soviet case, many of the “wonder weapons” remained safely in the realm of imagination, both for the enemies of the USSR, and the USSR itself.

The Soviet Navy expected the Ulyanovsk class to succeed the Kuznetsov.  Displacing over 80,000 tons, with a nuclear power plant, the Ulyanovsk were the first real Soviet competitors to the American supercarriers.  Although Ulyanovsk would retain a ski-jump, it would have had sufficient catapult capacity to launch strike-laden fighters and early warning aircraft, make it more or less equal to its American contemporaries.  For the first time, the Soviet Navy would have possessed a carrier capable of long-range offensive operations around the globe.

Although the Soviet Air Forces never developed a reputation for strategic bombing during World War II, in the interwar period the Soviets experimented heavily with long-range, four-engine bombers.  Indeed, at the outbreak of war, the Soviet Union fielded more of this type than any other country, although most of these were antiquated TB-3s.

During the interwar period, several countries contemplated the construction of “super-heavy” tanks, vehicles that would weigh three, or even four times as much as a standard battle tank. One German designer, in particular, Edward Grotte, worked on super-heavy designs for both Germany and the Soviet Union. The most interesting of the several designs presented to the Soviet General Staff was the T-42, a 100 ton beast with three turrets, a speed of 17 MPH, and a crew of 14-15.