These 5 Sniper Rifles are Dominating the Gun Market 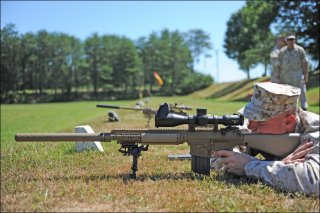 Here's What You Need to Remember: The L129A1 proved wildly popular with British troops in Iraq and Afghanistan, being one of the highest rated weapons used by troops. It’s one of the only Urgent Operational Request (UOR) weapons from Iraq and Afghanistan that has outlived its temporary nature and has gone onto be an integral part of the British rifle squad.

The United States is purchasing more of them through the Army’s Compact Semi-Automatic Sniper System (CSASS) program. Also, in a recent reform of infantry equipment, the British Army announced that it would be ditching its version of the M249 SAW, the L110 Minimi, and buying more L129A1 designated marksman rifles.

What rifles could be considered the best for this role?

At the time of adoption, the M110 featured advanced ergonomics for an AR rifle. It had an ambidextrous bolt catch and safety for ease of off-hand manipulation and faster reloads.

While the M110 is said to be on the chopping block to be replaced by the new H&K CSASS, U.S. Special Operation Command’s recent adoption of the 6.5 Creedmoor as a long distance round may extend the service of the M110. Versions of the M110 chambered in 6.5 Creedmoor were tested as SOCOM’s next DMR/sniper rifle in March 2018.

While the M110 was a successful program, the U.S. Army wanted a smaller and lighter version to be easier to carry and fit in with squad more. The procurement of a M110 replacement was run under the moniker of M110A1 Compact Semi Automatic Sniper System (CSASS). While KAC submitted a shortened version of the M110, the H&K G28 (a variant of the HK417) won the contract.

The difference between the CSASS and the SDM-R is in the type of ammunition they are meant to use and the scopes mounted on the rifle. The CSASS mounts a 3-20x Schmidt and Bender optic and is optimized for M118LR sniper ammunition. The SDM-R mounts a 1-6x Sig Tango Low Power Variable Optic (LPVO) and is optimized for the use of standard M80A1 ammunition. The 1-6 Sig Tango features an integrated bullet-drop compensating reticle that allows for faster, albeit less precise shots, as the scope isn’t meant to be “dialed” in like the more powerful Schmidt and Bender optic.

The SVD has proven itself to be reliable, rugged, and accurate since its adoption in the 1960s. The PSO-1 scope was the best designated marksman scope in the world when adopted, featuring a ballistically matched elevation adjustment out to one thousand kilometers, and a simple windage adjustment. In contrast, most western scopes were set to a fixed zero at the time. It also featured an advanced infrared light detector, although this feature began to be of dubious utility as the West phased out infrared spotlights on their night vision equipment.

The SVD continues to see use in many countries around the world today.

The L129A1 proved wildly popular with British troops in Iraq and Afghanistan, being one of the highest rated weapons used by troops. It’s one of the only Urgent Operational Request (UOR) weapons from Iraq and Afghanistan that has outlived its temporary nature and has gone onto be an integral part of the British rifle squad.

In American service, only SOCOM uses the SCAR in a designated marksman-type role. In SOCOM usage, the SCAR is usually topped with a 1x/6x or 1x/4x ELCAN optic, which feature bullet drop compensating reticles.

Like the M110, the SCAR was tested in 6.5 Creedmoor as a potential candidate to become SOCOM’s next semi-automatic sniper/designated marksman rifle.

Charlie Gao studied Political and Computer Science at Grinnell College and is a frequent commentator on defense and national security issues. This piece was originally featured in August 2019 and is being republished due to reader's interest.