These Are The Best 10 Naval Movies On Earth 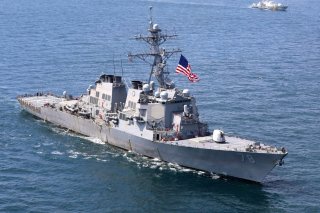 Here's What You Need To Remember: No list of great navy movies would be complete without at least one entry from John Wayne, the Duke. In Harm’s Way tells the story of U.S. Navy ship captain “Rock” Torrey in a weirdly fictionalized version of the Pacific War.

Ranking movies about navies is tough. The trouble isn’t an overabundant field of candidates to choose from. The trouble is that few stinkers sully the handful of films recounting tales about high-seas warfare. Good on Hollywood. So while you’re stuck at home waiting out the coronavirus, here are my ten favorites so you can take a virtual voyage on the briny main. Selection criteria? Great works are about people in the end; special effects, choreographed fights, and the rest are just embroidery. These films are my favorites because they explore human drama in the cramped confines of ships riding the waves or prowling the depths. The captain is an absolute monarch once all lines have been cast off. Unlike personalities jostle in close quarters. Many on this list derive from literary classics from authors like C. S. Forester, Patrick O’Brian, and Herman Wouk. Some depict the feats of real-life historical figures. In no particular order:

Horatio Hornblower: The Wrong War (1999). I begin by cheating, as A&E made a series of Hornblower films during the late 1990s and I recommend them all. (Start with the very first installment, The Duel, to establish the context for the series.) Forced to choose one, though, The Wrong War is the best of the bunch. It tells the story of a doomed Anglo-French expedition against Napoleonic France. A flotilla commanded by Hornblower’s skipper, Sir Edward Pellew of the frigate HMS Indefatigable, lands a royalist army along the French seacoast in hopes of overthrowing the little emperor and restoring the Bourbon dynasty to the throne. Hornblower leads a Royal Navy contingent ashore in company with a British Army officer, Major Lord Edrington. Tensions between the army and navy, among British social classes, and between the British and their French allies make up the atmosphere surrounding this riveting tale.

Master and Commander: The Far Side of the World (2003). My personal all-time favorite. The saga of a fictional British man of war, HMS Surprise, ordered to apprehend a French frigate sailing the South Atlantic on its way to raid merchant shipping in the Pacific Ocean during the Napoleonic Wars. The crew of Surprise, captained by “Lucky Jack” Aubrey, has to puzzle out how to overcome a faster, more heavily gunned, more stoutly built foe. A parable of friendship, leadership, and nautical wizardry runs in parallel with high-seas derring-do, in which Master and Commander abounds. The heroics are set to a stirring soundtrack made up in large part of works from composers like Luigi Boccherini and Ralph Vaughan Williams.

The Caine Mutiny (1954). This one also has a claim to be the best film in the genre. It has been said that the characters in The Caine Mutiny are archetypes of American naval officers, and that they all exist in every wardroom. If so, this is a sobering fictional portrayal of real life. The officers of USS Caine, an old destroyer converted for service as a minesweeper in World War II, remove the neurotic Captain Queeg from command after a series of mishaps. For instance, the ship suffers severe damage during “Halsey’s typhoon,” which battered the Third Fleet in the Pacific in December 1944, owing to the skipper’s inaction. Queeg accuses his officers of mutiny and has them brought to court-martial. The officers turn on one another during the trial, while the sad story of Queeg’s mental frailty slowly comes out. The Caine Mutiny excels not just as a tale of the sea but as a courtroom drama.

Mister Roberts (1955). An often comedic entry in the genre. The crew of the World War II cargo ship USS Reluctant, a.k.a. “The Bucket,” chafes at the tyranny of their skipper, Lieutenant Commander Morton. The title character, Lieutenant j.g. Roberts, tries to act as a buffer between captain and crew while seeking a transfer to combat duty on board a destroyer or cruiser. His efforts at diplomacy make fascinating viewing. Roberts makes a pact with Morton whereby the lieutenant stops requesting a transfer and the captain permits the crew its first shore liberty in months. Misadventures result. Meanwhile the idler Ensign Pulver, the film’s comic relief, slowly works up the gumption to push back against the skipper’s excesses. Lighthearted fare set on board an unglamorous old tub doing unglamorous duty.

In Harm’s Way (1965). No list of great navy movies would be complete without at least one entry from John Wayne, the Duke. In Harm’s Way tells the story of U.S. Navy ship captain “Rock” Torrey in a weirdly fictionalized version of the Pacific War. Why refer to the character who’s clearly Admiral Husband Kimmel as “CINCPAC A” and his successor, clearly Chester Nimitz, as “CINCPAC B”? Why invent South Pacific islands rather than situate the fighting in real campaigns? But such eccentric choices don’t mar the story much. Cashiered after Pearl Harbor, Torrey returns to favor, wins promotion to rear admiral, and goes on to oversee amphibious and surface actions against Japan. Some of the unflattering archetypes reminiscent of The Caine Mutiny put in appearances, including a self-serving politician-cum-admiral and a heroic commander whose failed marriage leaves him in a very dark place. Honorable mention among John Wayne navy films: They Were Expendable, a gripping account of patrol torpedo boats in the Pacific.

The Enemy Below (1957). There’s something about submarine warfare. If being cooped up in a surface vessel makes for intense interpersonal dynamics, try setting a story in a winsome ship that’s designed to submerge. The Enemy Below is the cat-and-mouse story of a U.S. Navy destroyer hunting a German U-boat in Atlantic waters during World War II. If anyone has made a better visual primer on tactics for detecting, tracking, and attacking an undersea enemy, I have yet to see it. And the psychological dimension is acute. The American and German skippers develop mutual respect and even admiration for each other during the protracted encounter. So many navy movies tell the U.S. Navy’s story from World War II, and that story is mainly a Pacific story. The Enemy Below serves a reminder that the United States couldn’t fight in Europe unless it defeated the U-boats. Drama that conveys a point.

Run Silent, Run Deep (1958). Crudely speaking, this film blends themes found in Moby Dick and The Caine Mutiny—obsession and factionalism. American submarine skipper P. J. Richardson is determined to exact vengeance from “Bungo Pete,” a Japanese destroyer ace who has sunk four U.S. Navy subs in the Bungo Strait, including Richardson’s last boat. Richardson convinces silent-service commanders to award him a new command. His second-in-command is Lieutenant Commander Bledsoe, who resents his assignment because he believes he should have been given a boat of his own, and because he frets about the skipper’s obsession with Bungo Pete. Richardson defies orders and takes his submarine back to the strait. Climactic undersea combat ensues when the Japanese destroyerman reveals the unorthodox tactics that won him fame.

Crimson Tide (1995). Purists will quibble about whether U.S. Navy regulations permit sea officers to relieve their captain of duty. You know what? Let them quibble. Crimson Tide is a rollicking yarn set in the 1990s, in that turbulent interlude between the fall of the Soviet Union and the consolidation of the Russian Federation. During a coup attempt, military units loyal to Russian ultranationalists seize part of the Russian nuclear arsenal and threaten the United States with atomic warfare. The U.S. Navy leadership orders the nuclear-powered ballistic-submarine Alabama—hence the film’s title—out to sea on a deterrent patrol. Communications with home are cut off during a torpedo duel with a Russian Navy attack sub acting on orders from the rebels. The attack interrupts a message that appears to be ordering a preemptive strike on Russia, but there’s no way to be sure. The sub’s commander, Captain Ramsey, and the executive officer, the cerebral Lieutenant Commander Hunter, square off over what to do absent complete orders. Both have to agree to release nuclear weapons; Hunter refuses. The crew separates into factions that battle for control of the boat. A compelling story with doomsday overtones.

The Admiral (2014). Lest you think seafaring exploits are a purely American or British thing, The Admiral will set you straight. Admiral Yi Sun-sin is Korea’s national hero, and few warriors have ever put on a display of martial badassery to compare with Yi’s. Set during the Imjin War of 1592-1598, when Japan invaded the Korean Peninsula in hopes of conquering the known world, the film shows how Admiral Yi repeatedly defeated the Japanese navy in the waters adjoining the peninsula. He suffered betrayal amid court factionalism, only to return and rally the fleet for the epic Battle of Myeongnyang. The clash pitted a Korean fleet that had been depleted by defeat in Yi’s absence against a numerically overwhelming Japanese fleet. Thirteen ships stood against over three hundred—and won! Small wonder Admiral Tōgō Heihachirō, the victor of the Battle of Tsushima (1905) and one of history’s most accomplished commanders, protested that it was Yi—not Tōgō—who was Asia’s foremost naval hero.