These are the World’s Most Reliable Hunting Rifles 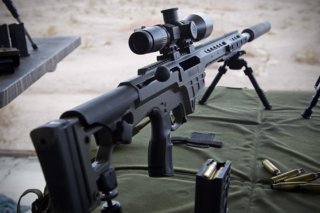 Here’s What You Need to Remember: Hunting, more than other countries in the Western world, lingers in America’s DNA. While the number of hunters in Europe and the rest of the industrialized world has declined with the rise of cities, hunting is still a major sport in the United States. Hunting is particularly popular in rural and suburban areas and large, stable populations of game, including deer, moose, and wild pigs are liberally distributed across North America.

The Browning BAR hunting rifle is actually based on the Browning BAR of World War II fame. The wartime BAR was invented by prolific firearms inventor John Moses Browning and introduced in 1918. Fully automatic and firing the powerful .30-06 cartridge, the BAR was the M249 squad automatic weapon of its time, serving the U.S. Army in both the Pacific and European theaters.

The BAR sporting rifle is an adaption of the wartime rifle, modified to run semi-automatic only. The sporting BAR also feeds from a 3–4 round internal detachable magazine and is available in typical rifle calibers for the mid-sized game, including .243, .308 and 7mm. A Safari version of the rifle is available in .338 Winchester Magnum for taking down large game. Lightweight with mild recoil, even the .338 BAR weighs just eight pounds three ounces—a mere pound more than a Browning bolt action rifle in the same caliber.

The Model 700 is a “push feed” action, meaning the bolt pushes the round into the breech, where the bolt is safeguarded by the company’s famous “three rings of steel”: one ring of steel surrounding the bolt, a second ring formed by the butt of the barrel, and a third ring formed by the forward receiver ring. The result, Remington says, is an extraordinarily safe action that won’t blow up in the user’s face. It also results in an extremely strong, consistent action lending itself to a high level of accuracy.

Ruger introduced the American series of medium bolt action rifles in 2011. The American rifles are a triumph of mass production: a strong, safe action rifle that is both lightweight and accurate. The rifles are feature-packed, including cold hammer-forged barrels, lightweight synthetic stocks, an integral bedding block and free-floated barrel, and a user-adjustable trigger. The American rifle is available in calibers ranging from .223 Remington to .30-06 Springfield.

The American series rifles are very affordable, with a street price often under $400. The combination of features and the attractive price tag has prompted some gun writers to describe the rifle as the Remington Model 700 for the twenty-first century. A strong aftermarket selection of parts is available for the American Rifle for shooters interested in building an entry-level long-range precision rifle.

A contemporary of the Model 700, the Model 70 is known as “The Rifleman’s Rifle” and produced by the world-famous Winchester Repeating Arms Company. Winchester made its name during the nineteenth century with a series of famous lever-action rifles and carbines, including the Winchester Model 1873 (“The Rifle That Won The West”) and Model 1894.

First produced in 1935, the Model 70 borrowed the elements from Mauser’s bolt action rifle design, particularly the claw extractor and controlled round feed. A lightweight rifle with a handsome walnut stock and diamond checkering, the Model 70’s popularity exploded after World War II, when a booming economy fueled a resurgent interest in shooting sports. In the past eighty years, Winchester has offered the Model 70 in virtually every rifle caliber ever made, introducing the new 6.5mm Creedmoor caliber for 2018.