These Big Russian Guns Can Rain Hellfire Down on NATO 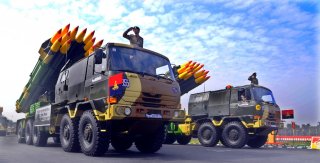 Here's What You Need to Know: This has stoked fears that long-range Russian artillery and missiles could devastate NATO airfields, ports and supply bases. Ground troops attempting to maneuver would be pinned by artillery barrages. If NATO airpower can’t knock out the Russian guns, then it’s up to the field artillery to do the job. And U.S. and British artillery may not be up to the task.

That’s the conclusion of a 2019 report on U.S. Army artillery—or ground fires—capabilities by the think tank RAND Corporation, which examined an Army artillery arm that has suffered two decades of neglect since the Pentagon began focusing on counterinsurgency in the early 2000s. During that time, aircraft and helicopters replaced artillery as the main source for fire support during small-unit operations in Iraq and Afghanistan, while highly trained gunners were relegated to infantry duties such as manning checkpoints.