With These Decisions, the Soviet Union Could Have (Maybe?) Won the Cold War 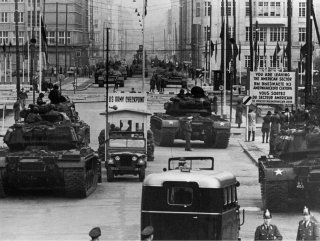 Here's What You Need To Remember: Few who actively fought the Cold War believed in American invincibility. Rather, they believed that U.S. victory (or even survival) depended on carefully calibrated investment in particular military technologies, as well as extensive interventions in the domestic politics of foreign countries (with the Korean and Vietnamese Wars representing the most extravagant such interventions).

Could the Soviets have won the Cold War? In retrospect, Soviet defeat seems overdetermined. The USSR suffered from a backwards economy, an unappealing political system, and unfortunate geography. But even into the 1980s, many Cold Warriors in the West worried that Red Victory was imminent.

It was not obvious that central planning would fail as dismally as it did.  Some economists, often working from the experience of World War II, believed that central governments could process information with sufficient speed and accuracy to successfully allocate resources across a society.  This included the allocation of capital (human and resource) to technological innovation. In a wartime context, this worked well enough; the state could direct investment away from consumer goods and towards critical military production and innovation. In peacetime, the system worked less well, as workers and consumers demanded better treatment.

Related to this, we now think of the U.S. commitment to a certain level of civil liberties as one of its greatest Cold War strengths. The far greater tolerance in the United States (which ran far short of absolute) for political dissent created an altogether stronger and more attractive social system, while also synergizing with the economic system to enable consistent economic growth and technological innovation.  At the time, however, many (both in the West and in the USSR) believed that tolerance for civil and political liberties exposed social and political weakness; the repressive Soviet system could better weather internal dissent than the relatively open American system.

What about American decisions? The United States could have decided not to wage the Cold War at all.  The Soviets seemed willing to accept the Finlandization of much of Western Europe, and in the absence of a U.S. presence Moscow might have renewed its old ties with Paris. As a result of reduced tension between the United States and the USSR, the Soviets would presumably have dedicated fewer resources to their war machine, reducing pressure on the rest of the economy. Of course, moving off a war footing might have produced social instability and pressure for internal change of repressive Soviet policies.

Robert Farley, a frequent contributor to TNI, is author of The Battleship Book. He serves as a Senior Lecturer at the Patterson School of Diplomacy and International Commerce at the University of Kentucky. His work includes military doctrine, national security, and maritime affairs. He blogs at Lawyers, Guns and Money and Information Dissemination and The Diplomat. This article first appeared in 2016.