These Ex-Nazis Were Ready For Another War With the Soviets 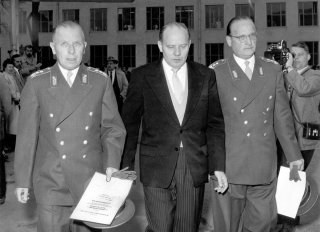 Here's What You Need To Remember: If the Soviets had invaded West Germany in the early days of the Cold War, they would have found more than a hodgepodge of NATO troops waiting for them.

The secret army was the brainchild of Albert Schnez, a former Wehrmacht colonel who later became an official in the Bundeswehr. Along with other German war veterans just after the war, he worried about what would happen if the Soviets invaded. West Germany had no army until 1955, and America demobilized much of its own military in 1945, leaving Western Europe vulnerable to Soviet conquest.

Schnez wanted ready-made battle staffs, composed of combat-experienced officers, who would form the nucleus of combat divisions. He was convinced that if the Soviets attacked, legions of German war veterans—and there was no shortage of those after World War II—would have flocked to the colors.

The “Werewolves” were supposed to strike terror in the hearts of Germany’s enemies. Indeed, the Allies feared a Nazi guerrilla war. Instead, the Werewolves merely proved that after six years of war, the German people were tired, hungry, and bombed out.