These F-35s Are the Stuff of Nightmares—For North Korea 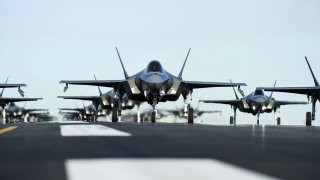 Here's What You Need To Remember: In just a few minutes, the wings launched as many F-35 sorties as they normally do in a full day of routine training.

In fact, there's one region where mass-takeoffs are an important military procedure: the Korean Peninsula. Ironically, that's the one region where the Trump administration is deliberately limited the flying branch's authority to organize large-scale warplane-launches.