These Five Bombers Have Enough Firepower to Wipe Out Whole Nations 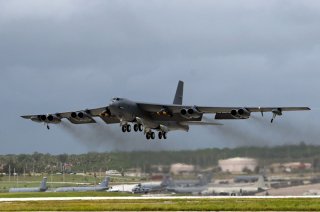 Here's What You Need to Remember: Most of the early Cold War bombers were expensive failures, eventually to be superseded by ICBMs and submarine-launched ballistic missiles.

Bombers are the essence of strategic airpower. While fighters have often been important to air forces, it was the promise of the heavy bomber that won and kept independence for the United States Air Force and the Royal Air Force. At different points in time, air forces in the United States, United Kingdom, Soviet Union, and Italy have treated bomber design and construction as a virtually all-consuming obsession, setting fighter and attack aviation aside.

The first strategic bombing raids of World War I were carried out by German zeppelins, enormous lighter than aircraft that could travel at higher altitudes than the interceptors of the day, and deliver payloads against London and other targets. Over time, the capabilities of interceptors and anti-aircraft artillery grew, driving the Zeppelins to other missions. Germany, Italy, the United Kingdom, and others began working on bombers capable of delivering heavy loads over long distances, a trail blazed (oddly enough) by the Russian Sikorsky Ilya Muromets.

Faster and capable of carrying more bombs than either the Gotha IVs or the Caproni Ca.3, the Type O 400 had a wingspan nearly as large as the Avro Lancaster. With a maximum speed of 97 miles per hour with a payload of up to 2000 lbs, O 400s were the mainstay of Hugh Trenchard’s Independent Air Force near the end of the war, a unit that struck German airfields and logistics concentration well behind German lines. These raids helped lay the foundation of interwar airpower theory, which (at least in the US and the UK) envisioned self-protecting bombers striking enemy targets en masse.

The de Havilland Mosquito was a remarkable little aircraft, capable of a wide variety of different missions. Not unlike the Ju 88, the Mosquito operated in bomber, fighter, night fighter, attack, and reconnaissance roles. The RAF was better positioned than the Luftwaffe to utilized the specific qualities of the Mosquito, and avoid forcing it into missions it could not perform.

Relatively lightly armed and constructed entirely of wood, the Mosquito was quite unlike the rest of the RAF bomber fleet. Barely escaping the design committee, the Mosquito was regarded as easy to fly and featured a pressurized cockpit with a high service ceiling. Most of all, however, the Mosquito was fast. With advanced Merlin engines, a Mosquito could outpace the German Bf109 and most other Axis fighters.

Although the bomb load of the Mosquito was limited, its great speed, combined with sophisticated instrumentation, allowed it to deliver ordnance with more precision than most other bombers. During the war, the RAF used Mosquitoes for various precision attacks against high-value targets, including German government installations and V weapon launching sites. As pathfinders, Mosquitoes flew point on bomber formations, leading night-time bombing raids that might otherwise have missed their targets. Mosquitos also served in a diversionary role, distracting German night fighters from the streams of Halifaxes and Lancasters striking urban areas.

The first Lancasters entered service in 1942. The Lancaster could carry a much heavier bomb load than the B-17 or the B-24 while operating at similar speeds and at a slightly longer range. The Lancaster also enjoyed a payload advantage over the Handley Page Halifax. From 1942 until 1945, the Lancaster would anchor the British half of the CBO, eventually resulting in the destruction of most of urban Germany and the death of several hundred thousand German civilians.