These Six Trends Will Define Competition in Space 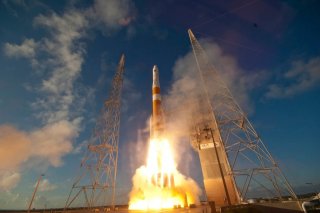 Here's What You Need to Know: The entire space-related sector is undergoing change, mostly positive but at unprecedented speed. What “end state” these six trends produce is unclear, but continued growth in US leadership, innovation, investment and space-presence is predicted.

Staying ahead of space trends – from satellite manufacture to new launch options – is daunting. Six trends – at least – are at work. To what exact end they vector is unclear, but watching is important. These trends will affect American investment in space, national security, our modern standards of living, and our wider economy.

First, heavy satellites are getting heavier, as more capability is attached to each satellite. Capabilities are commercial to national security, communications to climate prediction, crisis response to territorial protection, real-time analysis to event anticipation.

Heavier satellites tend to raise launch costs and can be expensive to design and build, but may reduce ground-station costs. While heavy satellites represent only a narrow slice of the market, this trend reinforces continued (but very expensive) interest in heavy lift. Additionally, a renewed emphasis on man-rated heavy launch capability only ups this ante.

Second and simultaneously, smaller satellites – including “cube-sats” which are often the rough size equivalent to a shoebox – are proliferating for commercial as well as both government civil and military use. These satellites stay on orbit for shorter periods, but perform specialized missions, often requiring a quick-turn launch, deployment and replacement. These satellites are multiplying, their applications are evolving magnitudes faster than any comparable change in heavy payloads.

Third, just as heavy lift requirements are triggering new heavy lift options, proliferation of smaller satellites is triggering a hunt for cost-effective, lighter options. The hunger is growing for cheaper, faster ways to loft individual cubes, cube clusters, and cube constellations. The hunt for low-cost launch has spawned new rocket companies – American and foreign – focused on getting orbital and suborbital to meet existing and predicted demand.

Fourth, cost-efficiency may be the premier variable. From new Office of Management and Budget (OMB) emphasis on cost-savings to redirection of resources in NASA’s 2020 budget, from calls for big launch savings and accelerating small payload placements to emerging economies of scale and size, the race is on for cheap suborbital and orbital launch options. Days of “build it and they buy it” are over.

Fifth, the Trump Administration is shining a spotlight on “Buy America.” This will directly affect space-related markets. After two Executive Orders, “Buy America” is back in vogue, and getting more popular by the month. This will affect commercial and national security space markets – more each year.

Reasons for emphasis on “Buy America” in space are not hard to figure out. On the commercial side, overt interest in favoring US manufacturers, US labor and US investment in rockets, satellites, and supply chains allows the President and Congress to reclaim American leadership in space, creating jobs and satisfying bipartisan political ambitions.

Finally, a sixth trend in literature, dialogue and among national leaders cannot be ignored. As commercial aviation receives new environmental scrutiny, rocket fuels are coming under pressure. In an era of bold initiatives, intense congressional oversight, and concern for incremental environmental impacts, fuels used in launches may become key to federal (and possibly even commercial) launch decision-making.

Net-net, the entire space-related sector is undergoing change, mostly positive but at unprecedented speed. What “end state” these six trends produce is unclear, but continued growth in US leadership, innovation, investment and space-presence is predicted. Exactly how fast payloads will shift, when launch options will widen, which American rocket companies first go orbital and suborbital, how intense the “Buy America” campaign will be, and what role the environment and fuels will play – are all uncertain.

What is certain is the accelerating rate of change across this sector. Space will be ever more important to governments, global commerce, and American consumers. Cube-sat development, nimble and responsive launch options, dramatically lower costs, pressure to “Buy American,” and environmental concerns are not going away. A new American future in space is coming.

Correction: The future is here.

This article by Steve Mosteiro originally appeared in WarriorMaven in 2019.