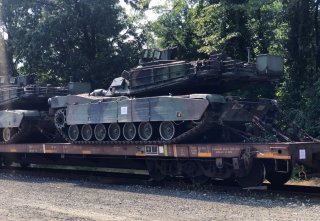 Here's What You Need to Remember: The M1 has proven an adaptable tank capable of fighting from the rolling hills of southern Germany to the deserts of Iraq. And yet the tank appeared to be a failure at first, caught in a tug-of-war of competing, varied interests that threatened to sink the project completely.

The M1 Abrams main battle tank has been the mainstay of the U.S. Army’s armor branch for more than thirty years. Heavily armored, powered by a gas turbine engine and equipped with a powerful 120-millimeter gun, the M1 has proven an adaptable tank capable of fighting from the rolling hills of southern Germany to the deserts of Iraq. And yet the tank appeared to be a failure at first, caught in a tug-of-war of competing, varied interests that threatened to sink the project completely.

In the late 1960s, the U.S. Army began the search for a new main battle tank. The M48/M60 series of tanks had reached a design dead end, and the Army desired a clean-sheet design to incorporate new technologies, including a gun-fired antitank missile. The Pentagon initially tried to cooperate with West Germany on a new tank, MBT-70, but the project was sunk by technical problems and cost overruns.

In the wake of MBT-70 the Army tried again to develop a new tank, a design that was eventually known as the XM-1 and later the M-1. The new tank would incorporate major advances in firepower, protection and mobility, but committing to an ultimate design would involve heated battles—and compromises—between all three.

he heart of any tank’s offensive firepower is the main gun. The Army had previously wanted to arm MBT-70 with a 152-millimeter tank gun capable of firing both shells and the Shillelagh gun-launched antitank missile. Unfortunately, reliability problems doomed the Shillelagh and the Army went back to conventional tank guns.

The Soviet Union’s primary tank was the T-62, armed with the U-5TS 115-millimeter gun, while the U.S. Army’s M60 tank was armed with the M68 105-millimeter gun. Although the Soviet gun was technically bigger this did not particularly bother the U.S. Army, which preferred to stick with the 105 for the XM-1. The Army’s argument was that the 105’s armor penetration qualities were still good enough and that the tank could store plenty of ammunition—fifty-five rounds of all types—inside the hull and turret. In a list of performance characteristics listed by the Army by priority, main gun killing power actually came third, behind armor protection and surveillance and target acquisition.

Ironically, it was the civilian leadership at the Pentagon that wanted a larger gun, and that pushed for the West German–developed Rheinmetall 120-millimeter gun. Although the gun would carry fewer (forty) rounds, it would future-proof the Abrams against future threats. The Pentagon was worried that newer Soviet tanks, including the 125-millimeter armed T-64, would outclass the XM-1 even as it entered production.

In the end both sides came to a compromise: early production M-1 models would come with the 105-millimeter gun, but would be upgradable to the Rheinmetall 120-millimeter. The next version of the tank, the M1A1, would be built at the factory with the bigger gun. The M1A1 began production in the mid-1980s, and by 1991 was widespread enough that the Army was able to field an all-M1A1 tank force to face off against the Iraqi Army’s “Lion of Babylon” variant of the Soviet T-72 main battle tank in Operation Desert Storm.

While the brass was satisfied with a smaller gun, it didn’t want to compromise on armor protection. Army officials had heard of a new British breakthrough in armor technology nicknamed “Burlington,” later nicknamed “Chobham” after the closest village to the UK’s Royal Armament Research and Development Establishment.

RARDE had undertaken major research to defeat shaped charge warheads common handheld RPG-7 rocket-propelled grenade launcher and Soviet antitank guided missiles. It had experimented with a variety of steels and ceramics. It even experimented with polypropylene plastic which was found to have, pound for pound, greater protective powers than steel. Unfortunately a pound of polypropylene was much larger by volume than a pound of steel, and the corresponding bulk made it impractical.

The so-called “Chobham” armor was a mixture of steel and ceramics, but the major design contribution was the use of a honeycomb-like structure that broke up the molten metal jet that comprised a shaped charge explosive and absorbed its energy. The result was, according to author Orr Kelly, an armor that in tests at Aberdeen Proving Ground “shrugged off shells fired at point blank range. It was beyond the wildest dreams of any tanker.”

Army officials came away enthusiastic about the armor but faced considerable skepticism and pushback from the “not invented here” crowd. That was gradually overcome once those involved became aware of how incredibly effective it was. Another issue was engineering-related and much more serious: the new armor had a weight problem.

Although Chobham armor worked very well, fashioning a turret out of it would require the turret to be built of steel welded slabs, unlike the cast turret of the M60. This was not a problem and actually gave the tank a sleek, futuristic look. The problem was that properly armoring the XM-1 would balloon the tank’s weight up from the desired thirty-five to forty tons to fifty-two tons. This in turn affected the vehicle’s mobility, particularly its horsepower to ton weight ratio. The Army’s dream of a lightweight, agile tank was being dashed by its armor requirements.

Meanwhile, the service wanted a 1,500-horsepower engine, double the power of the M60’s engine. It tried two diesel engines, the Daimler-Benz diesel that powered the Leopard 2 and a homegrown diesel built by Teledyne Continental, but the third engine, a gas turbine adapted from aircraft use, unexpectedly gained favor. The gas turbine allowed for quicker startups, faster acceleration, ran without producing smoke, and most importantly was smaller and three tons lighter than its competitors, saving valuable weight. Although the gas turbine would require the Army to stock vast quantities of gasoline (in addition to diesel fuel) on the battlefield, the advantages of the turbine eventually won out.

The development of the M1 Abrams is a classic study into how competing requirements can collide with one another. The trifecta of tank power, firepower, protection and mobility all required some level of compromise. The Army was willing to bend some requirements, particularly with regards to weight, to get a good tank instead of being unbending in a vain search for the perfect tank. The result is the most battle-tested main battle tank today, a tank that, with periodic upgrades, has stood the test of time.