Tom Clancy and the Cold War: Could the Soviet Union Have Taken Iceland? 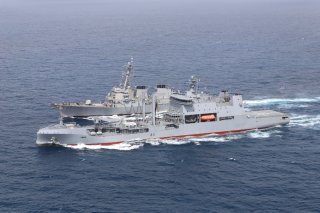 Here's What You Need to Remember: The Soviets could’ve taken Iceland. Or at least caused a lot of chaos and disruption if the United States did not bolster the defenses beforehand. But that would just be the beginning. A Soviet occupation force would probably face a NATO counter-attack, likely supported by at least one U.S. carrier battle group, without having Soviet warplanes backing them in comparable numbers — and little cover from NATO aircraft flying overhead.

<p>Tom Clancy’s 1986 novel&nbsp;<a href="https://www.amazon.com/Red-Storm-Rising-Tom-Clancy/dp/042510107X/ref=as_..." rel="noopener noreferrer" target="_blank"><em>Red Storm Rising</em></a>&nbsp;depicts a conventional war between NATO and the Warsaw Pact. It’s one of Clancy’s best books and, interesting for a story about a Third World War, doesn’t involve a nuclear apocalypse.</p>

<p>It does describe a ground war in Germany, naval and air battles in the North Atlantic and — central to the plot — an invasion of Iceland by a regiment of Soviet troops. Clancy, who died in 2013, was known for his realism and extreme attention to technical detail.</p>

<p>In&nbsp;<em>Red Storm Rising</em>, the Soviet troops overwhelm a U.S. Marine company in the Nordic island country after sneaking to shore inside the MV&nbsp;<em>Yulius Fuchik</em>, a civilian barge carrier loaded with hovercraft. Before the amphibious assault, Soviet missile target and destroy NATO’s F-15 fighters based at Naval Air Station Keflavik.</p>

<p>Iceland was an overlooked but&nbsp;highly strategic location in the Cold War. Were the Soviet Union’s attack submarines to break out into the Atlantic and threaten NATO shipping, neutralizing Iceland and penetrating the “<a href="https://en.wikipedia.org/wiki/GIUK_gap" rel="noopener noreferrer" target="_blank">GIUK gap</a>” would be of vital importance.</p>

<p>For a possible answer, let’s consult&nbsp;<em>The Northwestern TVD in Soviet Operational-Strategic Planning</em>, a 2014 report by Phillip Petersen — an expert on the Soviet and now Russian militaries for the Potomac Foundation.</p>

<p>Petersen’s analysis is a revealing blueprint for how to defend Scandinavia from a Russian attack. Much of the report is comprised of military-oriented descriptions of remote rivers and sparsely-inhabited valleys — pictures included — which the word “obscure” can barely describe. Obscure, except in case of World War&nbsp;III.</p>

<p>Faced with a predominantly sea-oriented NATO coalition dependent on control of the [sea lines of communication], there can be no question but that the Soviets would have liked to capture or at least neutralize Iceland,” Petersen&nbsp;wrote.</p>

<p>“Soviet operations against Iceland could have theoretically covered a wide spectrum of means, ranging from air and missile attacks to troop assaults.”</p>

<p>Supporting the theory that the USSR could have pulled off a Clancy-style surprise attack, the Soviet Union possessed the exact equipment in&nbsp;<em>Red Storm Rising </em>— reflecting Clancy’s attention to all-things hardware —<em> </em>suitable for landing troops in Iceland without the need for a major&nbsp;port.</p>

<p>In fact, the Soviets trained to use such repurposed “roll-on/roll-off” vessels like&nbsp;<em>Yulius Fuchik&nbsp;</em>for precisely those kinds of missions. Meanwhile, NATO kept its military presence in Iceland minimal because of the country’s heated political divisions over its participation in the alliance.</p>

<p>Thus, in the event of a war breaking out, NATO would have to rush troops to the island and shore up its defenses to raise the costs of, and hopefully deter, a Soviet&nbsp;attack.</p>

<p>Iceland’s remote location and ruggedness — and the Soviet Navy’s comparative weakness — meant that a surprise attack by a small and relatively light force before the Western alliance could respond was Moscow’s only feasible strategy.</p>

<p>The Soviet military had experience with similar operations in World War II, including deploying small teams to Norway to spy on German troops. In 2014, Russia carried out an almost-bloodless surprise attack on Crimea which occurred too quickly for Ukraine to&nbsp;respond.</p>

<p>Iceland would’ve been a far more difficult target. For one, there was the problem of distance. The country is also windy and&nbsp;<em>rough</em>, making an airborne drop an exceedingly hazardous proposition. Paratroopers might have been swept away by winds and dashed into rocks, or broken their legs upon&nbsp;landing.</p>

<p>And any Soviet operation would have faced challenges at sea. The Kremlin would have to bet on basically perfect weather and skilled navigators to make it through Iceland’s narrow fjords and around its numerous&nbsp;reefs.</p>

<p>However, “even if the Soviets had attempted a lower-risk effort such as inserting a naval infantry company by submarine,” Petersen wrote, “such a force might have been sufficient to attack the Kevlavik airbase, while special-purpose (<em>spetsnaz</em>) forces, in teams of five to twelve men each, attacked outlying facilities like that at&nbsp;Hofn.”</p>

<p>Hofn was the site of a Cold War-era NATO radar station which tracked Soviet bombers heading&nbsp;south.</p>

<p>So the Soviets&nbsp;<em>could’ve</em>&nbsp;taken Iceland. Or at least caused a lot of chaos and disruption if the United States did not bolster the defenses beforehand.</p>

<p>But that would just be the beginning. A Soviet occupation force would probably face a NATO counter-attack, likely supported by at least one U.S. carrier battle group, without having Soviet warplanes backing them in comparable numbers — and little cover from NATO aircraft flying overhead.</p>