Top Russian Official Claimed the West is Defenseless Against This SLBM 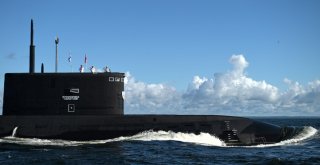 Here’s What You Need to Remember: The Bulava-equipped Borei submarines are intended to become a core pillar of Russia’s new nuclear triad. Navarsky said that the Pacific Fleet will receive two new Borei-A submarines in coming years, adding that both vessels will be armed with Bulava missiles.

Atop Russian Navy official claimed that the West is defenseless against the “invulnerable” new Bulava sea-launched intercontinental ballistic missile (ICBM).

“As its main advantages, the Bulava is easy in its maintenance and can maneuver at its boost stage, which makes the missile invulnerable to any ABM  (Anti-Ballistic Missile) system,” he said, according to Russian state-owned media enterprise TASS.

The Bulava, whose NATO reporting name is SS-N-32, was conceived in the late 1990s as an advanced submarine-launched variant of the Topol-M land-based ICBM. But the final, serially-produced Bulava missile has little in common with the Topol-M and appears to be largely based on a unique design. The Bulava’s tortured development process included several major failures during its early tests in the 2000s.

The program appeared to get back on track with a successful launch from Typhoon-class submarine Dmitri Donskoi in 2010. But another high-profile launch failure in summer 2013 spurred a new investigation that reportedly uncovered the presence of unspecified “manufacturing defects.” The missile was finally accepted into service in 2018 after several successful tests in the late 2010s.

The Bulava is meant to replace the aging R-39 Rif SLBMs found on the Soviet-era Typhoon-class submarines. The new SLBM is expected to feature six to ten Multiple Independently Targetable Re-entry Vehicle (MIRV) warheads with a yield of 100-150 kilotons, guided by an advanced Global Navigation Satellite System (GLONASS)-powered digital inertial navigation system. At around eight thousand kilometers, the missile’s range is roughly in line with America’s Trident SLBM. The missile’s shallow flight trajectory makes it relatively difficult to intercept. However, questions linger over Bulava’s accuracy relative to its western counterparts.

The Bulava missiles will be fielded by the Russian Navy’s Project 955 Borei-class nuclear-powered ballistic missile submarines, which entered service in 2013. Borei’s 955A revision, also called Borei-A, was confirmed by Russian sources to support up to sixteen Bulava missiles. Ten Borei-class submarines are expected to be completed by 2028, with four already in service.

The Bulava-equipped Borei submarines are intended to become a core pillar of Russia’s new nuclear triad. Navarsky said that the Pacific Fleet will receive two new Borei-A submarines in coming years, adding that both vessels will be armed with Bulava missiles.