Treating China As An Ideological Threat Is Doomed To Fail 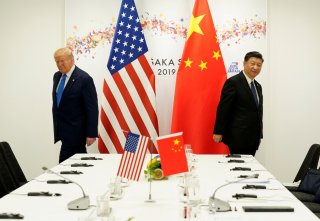 In the US–China relationship, ideology now trumps interests. In July, US Secretary of State Mike Pompeo’s speech on China at the Nixon Library repeatedly referred to Chinese leader Xi Jinping as General Secretary of the Chinese Communist Party (‘the Party’) rather than as the president of China. Referring only to Xi’s power over the Party in this way is part of a US government drive to appear anti-Party rather than anti-China.

It is a fundamental mistake to treat relations with China as an ideological mission. Viewing China as an ideological threat — rather than just a big power competitor — focusses too much on Xi Jinping and overlooks how his power is constrained by the Party apparatus and China’s sheer size. It also inaccurately interprets Xi’s personal leadership style as Chinese ideology.

Power within the CCP comes from being able to make others in the Party do what one wants behind closed doors, rather than from one’s job title. Xi Jinping is rather good at this. Though formally he cannot fire anyone, in practice, by appointing a handpicked lieutenant with strict orders, he can get rid of anyone he wants. The same can be said for his power over appointments: while other people may formally hold those positions, Xi’s power of persuasion and the fear of investigation still grants him the ability to rule.

Given there are over 90 million party members across more than 30 provinces, nearly 900 municipalities and nearly 3000 counties, there exists a vast bureaucracy that is fundamental to the prosecution of the leader’s interests. Xi deals with subnational leaders by fusing the previously separated systems of party and government. Party inspectors and party incentives now override the conduct of national governance. Performance is measured against top-down party indicators, rather than on indicators of competence relative to other officials of the same level and paygrade.

Xi believes two things will help the Party maintain its power. The first is a traditional Chinese focus on inculcating moral values under the guidance of the Party, rather than seeking checks and balances on individual power. The second is ensuring that the Party has a voice in all private enterprises and continues to encourage large state-owned enterprises.

This ideology drives Xi’s governance approach. He has taken powers away from local leaders and executive bodies, moving them to the legislatures and internal inspectors in a sort of top-down populism, under which he wants people to follow his orders more strictly. This puts pressure on the drafters of legislation and central planners. It makes local leaders more likely to work to rule, rather than to take responsibility in their local area. (It also makes China’s governance more brittle, as these local leaders focus more on upwards reports and ideological purity, instead of having the flexibility to address what they see as the most pressing local issues).

But Xi’s ideological focus is on domestic matters rather than international competition or foreign policy. Xi is reportedly in charge of US–China relations, and the Politburo, the main decision-making body, discusses foreign policy for perhaps 20 per cent of the time. But discussions are usually framed in terms of ‘great powers’ rather than in terms of ‘ideological competition’. Foreign policy is rarely the main topic of Politburo meetings: only one-seventh of formal study sessions and briefings are on foreign issues.

Treating China as an ideological threat is likely to lead those outside China to the wrong conclusions. In a report for the Australian Strategic Policy Institute’s (ASPI) International Cyber Policy Centre, Alex Joske, for example, declared the United Front, one of the weaker Party ministries, ‘an inspiration for the CCP’s engagement with political parties around the world’. But the United Front is a domestically focused body, forming part of the consultative organs. Foreign work makes up less than 20 per cent of its functions.

When ideology is pushed overseas, it is a bug, not a feature. China’s foreign policy today suffers from being too domestically driven to be effective. Take the recent emergence of ‘wolf warriors’, aggrieved and abrasive Chinese diplomats who launch into Twitter tirades against those they feel are hurting Chinese interests. They win no overseas hearts and minds and have little to no success in spreading Chinese values. But they may look tough back home, regardless of their diplomatic self-harm. And this is the audience they care most about, rather than the nation they may be posted in.

The constant focus on what things look like back home points to the people that Xi worries the most about — the elite that hang around Xi’s inner circle of the 3000 central Party members, themselves the constituency of China’s top seven leaders. That elite seems to be the group most unhappy about Xi’s reign: forced to have their values examined and questioned, and some feeling that China is going in the wrong direction. It is also the group most likely to speak to outsiders.

Even bearing in mind any grumblings of the elite, the rest of China’s population reports consistently high levels of satisfaction with Xi’s leadership. So why would the United States think it can separate Xi Jinping from China’s people by labelling him ideological?

China’s leaders know they must hang together or hang separately. Internal division is what they see as their main threat; turning US–China relations into an ideological battle will just unite these groups. Western foreign policy would be better directed were it anchored on this understanding.

An extended version of this article appears in the most recent edition of East Asia Forum Quarterly, ‘Japan’s Choices’, Vol. 12 No. 3.