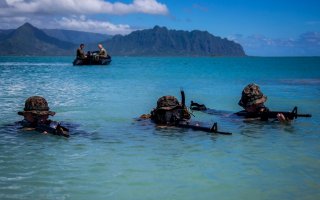 Suddenly a bugle sounded, and the Japanese troops rushed the Raiders, screaming Banzai! But the attempt to swarm the larger force of Raiders ended disastrously, with the attackers all cut down at short range. Undeterred, the bugle later rang a second time and the Japanese launched a second suicide attack in which Kanimetsu’s marine platoon was mostly wiped out, though intermittent sniper continued from a few dozen survivors. Worried that there were even more reinforcements in the wings, Carlson decided not to press the attack on the Japanese base.

At 1:30 PM the reinforcements arrived—from the air. A dozen Mitsubishi F1M floatplanes swooped down on the island and bombed and strafed it for an hour, sending the Raiders scurrying for cover but failing to inflict any casualties. Then one of the F1Ms and a huge Kawanishi flying boat came in for a landing at the lagoon. The Raiders nearby blazed away at the aircraft with their machineguns and anti-tank rifles, setting the smaller float plane ablaze. The seaplane, carrying dozens of troops onboard, managed to land on the water. However, the volume of incoming fire must have given the pilot second thoughts, as it taxied around on the water and took off again before crashing into the lagoon.

The colonel decided it was safest to withdraw back to the submarines as planned at 7 PM. However, as they set back off into the ocean, his men discovered the motors on their boats had ceased working entirely, and the tossing surf and wind made it nearly impossible to paddle back to the submarines. The exhausted Raiders ditched the useless motors on their launches and for five hours made repeated efforts to power through the violent waves, losing most of their weapons and gear in the process. Eventually, eleven out of eighteen boats managed to make it to the American submarines. But by midnight, Carlson, Roosevelt and seventy more Raiders, many of them wounded, were still stuck on Butaritari.

Carlson fell into a state of total despair. Out of radio contact with the American submarine, he was convinced Japanese reinforcements were only hours away. He decided that the only hope for his marines—and to save the president’s son in particular—was to surrender. He even ordered Cpt. Ralph Coyte to draft and deliver a surrender note, which was tentatively handed over to a Japanese soldier found in a native hut. But even the attempted surrender went awry—shortly afterwards, a marine accidentally shot the Japanese soldier carrying the message. The note was later recovered by Japanese forces and used for propaganda purposes.

Individual boats continued to struggle through the waves, however, including one with Roosevelt onboard at 8 AM the following morning. An hour later, a five man crew led by Sergeant Allard volunteered to row back to the atoll while trailing a rope that the Raiders could use to pull themselves onto the submarine. But as the launch was halfway there, a squadron of Japanese planes swooped down upon the Nautilus, dropping bombs. The American submarines crash dived and the planes strafed the rescue team, apparently killing them.

By then, Carlson had reassessed the situation, and decided to complete the mission on Makin. The Raiders scrounged Japanese supplies weapons to replace the ones that had been washed away and set about sabotaging the seaplane base, which they found deserted, all the while dodging additional air attacks. They proceeded to destroy most of the complex and set 1,000 drums of aviation fuel ablaze. Discovering the lagoon did not have a shore battery after all, Carlson decided his men had a better chance of reaching the submarines from there instead.

Using a semaphore lamp, he convinced the Nautilus’s captain to enter the lagoon, proving he was not Japanese by referencing a dinner conversation they had shared earlier. Then the Raiders paddled out using a raft rigged together from three of the launches tied together with two still-functioning outboard motors and native canoes serving as outriggers. They had bartered for the canoe and the burial of their dead from the natives, in exchange for USMC combat knives.

The new craft made it across to the submarines and the relieved Raiders finally embarked on the voyage home. It was still not easy riding—amongst the seventeen wounded soldiers, four surgeries had to be performed on the submarine’s mess table. Thankfully, all the wounded soldiers survived.

Carlson’s Raiders arrived back at Pearl Harbor on August 27, receiving a hero’s welcome. They reported eighteen dead and twelve missing in action, while estimating to have killed 160 enemy soldiers. According to Japanese record, the true toll counted forty-six base personnel, plus an unspecified number onboard the destroyed Japanese boats and aircraft. A year later, the film Gung Ho! starring Randolph Scott would depict a fictionalized version of the Makin raid, adding a fanciful attack-by-steamroller.

However, there were several sad postscripts to the Makin Island raid. Five months later, the Argonaut was sunk in a duel with Japanese destroyers, with all hands lost. When U.S. forces seized Makin Island in November 1943 after a grueling eleven-day battle, they learned a startling fact from the natives; the submarines had inadvertently left behind nine Raiders separated from the main force—including the five-man rescue team, who had washed ashore. After surviving in the wild for a week, they negotiated their surrender to Japanese forces. Imprisoned for a month at Kwajalein, they were then beheaded on the order of Adm. Kōsō Abe due to the logistical inconvenience of transporting them back to Japan. After the war, Abe was tried and executed for killing POWs, while his two subordinates were sentenced to five and ten years of imprisonment. Japanese records, for their part, allege that the corpses of their dead were mutilated by the Raiders.

Carlson and his battalion would go on to distinguish themselves again in brutal battles in Guadalcanal. Still detested by the brass, he was transferred out of his command in March 1943, and his replacement ended his doctrinal innovations, with one notable exception: his three-fireteam squads would become a standard aspect of U.S. Marine organization that remains to the present day. Carlson would continue to see combat in an advisory role and was wounded in action at Saipan attempting to rescue a wounded marine; he then died from heart disease in 1947. As for the Raider battalion, they were disbanded in 1944; the Marine leadership had always resented the concept, and saw little use for additional special operations in the Pacific theater.

The Makin raid inflicted only minor military damage, and its strategic impact is disputed. Some historians contend that it led the Japanese military to reinforce the island of Tarawa and root out the Allied local spy network, worsening marine losses when they invaded Tarawa and Makin in 1943. Others argue that the raid achieved its purpose in 1942 by diverting resources from the critical battle unfolding on Guadalcanal.

Either way, Carlson’s Raiders managed to recover from near disaster to deliver a moral boost to the American public, and also gave the U.S. military its first lesson in the challenges of special operations—particularly the exfiltration part!

In 2014, seventy years after the Raider’s disbandment, the Marine Corps redesignated its Special Operations Regiment the Raider Regiment in honor of their World War II predecessors.

As for the Raiders that fell at Makin, more than a half century later, nineteen of them were recovered from graves which had been carefully lain by the Butaritari islanders and transported by C-130 for burial in the United States.