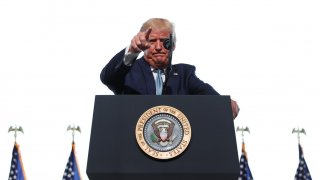 The State Department issued a status report early Tuesday on the Protecting Life in Global Health Assistance policy, which requires foreign nongovernmental organizations getting U.S. taxpayer funding to agree not to perform or actively promote abortion.

Then, late Tuesday afternoon, the administration released recommendations by an ethics advisory board to Secretary of Health and Human Services Alex Azar on alternatives to research using fetal tissue from abortions.

The new status report found no disruptions to providing health care abroad, with only eight of the 1,340 prime grantees declining to take federal funding with the conditions attached. The two largest of the eight were the International Planned Parenthood Federation and Marie Stopes International.

“The government worked quickly to transition activity to new partners in order to prevent and resolve any delays or gaps in health care being delivered around the world,” a senior Trump administration official told reporters Tuesday.

That’s contrary, the official added, “to the narrative sometimes pushed by the left that pro-life policies sometimes stand in the way of women’s health and wellness.”

In June 2019, the Trump administration announced it would curtail the use of taxpayer dollars to fund research using fetal tissue from aborted fetuses.

On Tuesday, the independent ethics advisory board submitted its report to Azar, advising him on how best to handle pending research proposals seeking federal funding to conduct research on fetal tissue derived from abortions, according to the senior administration official.

Azar appointed the panel, made up of health ethics experts outside of the HHS, six months ago.

The government had been funding human fetal tissue research since President Bill Clinton lifted the funding moratorium in 1993 on the 20th anniversary of Roe v. Wade, the Supreme Court decision legalizing abortion across the nation.

“Clinton told the country that research could lead to treatment for Parkinson’s [and] Alzheimer’s [diseases],” the senior Trump administration official said. “Now we know, 27 years on, none of that has happened—and [we’re] standing up for the unborn by preventing their bodies from being used as lab material for research purposes.”

Under federal statute, if the HHS secretary has ethical concerns about proposed research, those proposed projects can be reviewed by an ethics board.

The ethics advisory board considered 14 proposals from research scientists, and examined the “nature of informed consent,” “justification,” and “possible alternatives,” the senior administration official said.

“Its report, when it’s released, we believe, will really demonstrate that the board carefully considered the ethical implications of all the research proposals and gave independent individual consideration to each research proposal,” the senior administration official said ahead of the release.

This article by Fred Lucas first appeared in The Daily Signal on August 18, 2020.