Trump Impeachment: How the Process Will Unfold in the US Senate 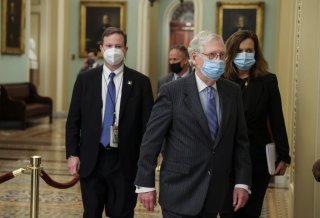 Despite US president Joseph Biden’s concern over making the most of any honeymoon period to pass his legislative agenda, Congress is now consumed by the second impeachment trial of Donald Trump. Impeachment itself is a vague process with few concrete rules. This makes the importance of understanding these rules and the procedure for this unprecedented Senate impeachment trial of a former president extremely significant and of great historic consequence.

While each impeachment is uniquely confined to a particular context or controversy, the process itself has been consistently defined by the same vague references contained in the constitution. The constitution confines impeachment to cases of what it refers to as “treason, bribery, or other high crimes and misdemeanours”.

While this phrase had precedent in British common law, the issue of defining an impeachable offence has often revolved around investigating a suspected abuse of power. We saw this, for example, in Trump’s first impeachment trial. In that case, Congress examined whether Trump had encouraged Ukraine to interfere in the US election campaign by investigating Biden – his anticipated opponent. The Senate, with a small Republican majority at the time, voted largely along party lines to acquit the president.

Under the Constitution, the House of Representatives “has the sole power” to consider impeachment. If a simple majority from the House votes in favour of even one article of impeachment, the president is impeached. They must then be tried by the Senate.

Too often, the term impeachment is only understood as the removal of a politician from office. But while three US presidents have been impeached by the House of Representatives (Andrew Johnson in 1868, Bill Clinton in 1998 and Donald Trump in both 2019 and 2021), none has been convicted by the Senate.

Richard Nixon, the 37th president, resigned from office in 1974 to avoid an impeachment trial that seemed certain to remove him from office. But the full consequences of a successful impeachment process itself have never occurred and debate over the role of partisanship continues with increasing concern over the potential for impeachment to become an exercise in partisan loyalty.

The House passed a single article of impeachment against Trump, for “incitement of insurrection”, the charge now being considered by the Senate. There is no standard process for an impeachment trial. The guidelines for the trial are agreed by senators to reflect the particular circumstances.

In this case, Trump has declined to speak in his own defence and, while there is an option to include witnesses, it is not compulsory. This case is particularly suited to first-person testimony from members of Congress, as the lawmakers themselves were witnesses to the alleged crime as it unfolded at the Capitol. There is also video footage that could provide evidence in the trial.

Senators are sworn in to act in the capacity of jurors. Duty to country and constitution is intended to come first over party loyalty, with senators swearing to “do impartial justice according to the Constitution and laws”. The House impeachment managers act as prosecutors, while the president has a team of lawyers for his defence.

Nine Democrats have been chosen by the House speaker, Nanci Pelosi, to act as impeachment managers, led by Representative Jamie Raskin of Maryland.

As we saw in Trump’s first impeachment, the chief justice of the Supreme Court is meant to oversee a president’s trial in the Senate, as stipulated by the constitution. But, as Trump is no longer in office, Chief Justice John Roberts has passed this responsibility over to president pro-tempore of the Senate, Patrick Leahy. The senior senator from Vermont was chosen by his fellow senators to act as the presiding officer, in respect for his longstanding public service in office.

The Senate impeachment trial culminates in a vote on whether to convict. A successful impeachment requires a two-thirds majority of senators – 67 votes – to convict. This final vote will be preceded by closing arguments limited to four hours and followed by deliberations. The unlikelihood of the almost evenly divided Senate (50 Republicans, 48 Democrats and two Independents), convicting Trump has obscured the debate over what convicting a politician who has already left office would look like.

Partisanship has already been apparent in 45 Republican senators voting against holding an impeachment trial in the first place. The argument over the whether the trial is constitutional has become part of the process – the first day of debate in the trial has been devoted to the matter. The impeachment trial proceeds if there is a majority of 51 votes in favour. According to the constitution, the vice president, Kamala Harris, can only vote in the Senate in cases of a 50-50 impasse.

With a majority in favour, the trial should begin in earnest with each side presenting their arguments. It has been agreed that this process should not exceed four days. Following this, there will be four hours for senators to ask questions, succeeded by two hours debating motions subpoenaing documents and witnesses, as called for by House managers. The trial will be extended to include discovery and witnesses, if the Senate votes in favour of these motions.

David Schoen, Trump’s lawyer, initially asked for the trial not to continue through the Jewish Sabbath. It was decided that the trial would pause through Friday evening and Saturday, continuing on Sunday February 14. However, Schoen has now withdrawn this request giving the trial potential to go through the weekend. Despite this being Valentine’s Day weekend, the current hyper-partisanship in Congress is unlikely to inspire many sentiments of affection or congeniality.