Trump's Executive Order on the Police Should Be Celebrated 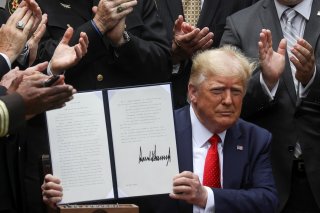 Since the tragic and inexcusable killing May 25 of George Floyd, Americans have called for police reform. Some proposed “reforms”—such as demands to defund or dismantle police departments—are misguided, while more measured responses may be appropriate.

After all, when tragic incidents like this occur, as they occasionally do, it is often the police who suffer the greatest backlash, both in threats to their own physical safety and in growing distrust from some in the communities they are sworn to serve and protect.

As I stated last week in a commentary with my colleague Cully Stimson: “Unfortunately, when a heinous crime like that occurs—regardless of whether it was the result of overt racism or just horrifically bad training or judgment—it rips the scab off an old and deep wound and rubs salt in it.”

Even though there are more African American police officers in positions of leadership than ever before, the police carry a lot of historical baggage—and they know it.

House Democrats have introduced their police reform bill—the Justice in Policing Act—and Republicans in the House and Senate reportedly may soon unveil their own proposals.

President Donald Trump, meanwhile, signed an executive order Tuesday titled “Safe Policing for Safe Communities” and it is a definite step in the right direction.

In fact, this executive order builds on steps the president already has taken. Last October, the president created a Presidential Commission on Law Enforcement and the Administration of Justice, tasked, among other things, with looking at how to improve police departments’ relations with the communities they serve.

At a roundtable event Thursday in Dallas, Trump said: “We’re working to finalize an executive order that will encourage police departments nationwide to meet the most current professional standards for the use of force, including tactics for de-escalation.  Also, we’ll encourage pilot programs that allow social workers to join certain law enforcement officers so that they work together.”

The new executive order addresses these and other issues. It does not sugarcoat the extent and nature of the problem.

After acknowledging that federal, state, local, tribal, and territorial law enforcement officers “place their lives at risk every day to ensure that [our] rights are preserved,” Trump’s order continues:

Unfortunately, there have been instances in which some officers have misused their authority, challenging the trust of the American people, with tragic consequences for individual victims, their communities, and our Nation. All Americans are entitled to live with the confidence that the law enforcement officers and agencies in their communities will live up to our Nation’s founding ideals and will protect the rights of all persons. Particularly in African American communities, we must redouble our efforts as a Nation to swiftly address instances of misconduct.

In terms of professional standards, the executive order directs the attorney general to set standards and certify independent credentialing bodies that will, among other things, assess the efficacy of law enforcement agencies’ policies and training regarding use-of-force techniques (including prohibiting the use of chokeholds “except in those situations where deadly force is allowed by law”), de-escalation techniques, and early warning systems to identify problematic personnel issues, as well as practices around community engagement.

To incentivize law enforcement agencies to subject their policies and practices to this review, the order states that the attorney general

shall, as appropriate and consistent with applicable law, allocate Department of Justice discretionary grant funding only to those State and local law enforcement agencies that have sought or are in the process of seeking appropriate credentials from a reputable independent credentialing body certified by the Attorney General.

It also provides that the attorney general should require credentialing bodies to confirm that any law enforcement agency’s use-of-force policies adhere to all applicable federal, state, and local law before it may be considered to be credentialed.

To prevent a situation where bad cops simply transfer from one police department to another, the president directs the attorney general to create or adopt a database that will enable police departments to share information about fully adjudicated cases against officers who engage in excessive uses of force.

And again, the attorney general is directed to allocate grant funding by the Justice Department to “only those law enforcement agencies that submit” such data.

As for the myriad new issues that police confront on a daily basis, to which Barr alluded in Dallas, the executive order cites the need to “take actionable steps to safely and humanely care for those who suffer from mental illness and substance abuse in a manner that addresses such individuals’ needs and the needs of their communities.”

While promoting “the use of appropriate social services as the primary response to individuals suffering from impaired mental health, homelessness, and addiction,” the order recognizes that law enforcement officers often encounter such individuals and must be “properly trained for such encounters.”

Trump’s order tasks the attorney general and the secretary of the Department of Health and Human Services to work together over the next 90 days to develop training and resources to support officers who encounter individuals suffering from impaired mental health, homelessness, and addiction. It instructs them to increase the capacity of social workers to work alongside law enforcement officers as part of new “co-responder programs” so that they arrive and together address situations in which people are in distress.

The order also directs the HHS secretary to conduct a survey of community support models that address mental health, homelessness, and addiction, and to submit a report within 90 days containing recommendations on how appropriated funds may be reallocated to support adoption of successful models, along with recommendations for additional funding, if needed.

Finally, the executive order tasks the attorney general with developing and proposing new legislation that, if enacted, would “enhance the tools and resources available to improve law enforcement practices and build community engagement.”

These would include grant programs to defray some costs associated with the new credentialing, information reporting, and co-responder/community support programs, as well as training and technical assistance pertaining to use-of-force policies and de-escalation techniques.

Such grant programs also might cover recruitment and retention of high-performing officers, confidential access to mental health services for law enforcement officers, and programs designed to improve relations between law enforcement agencies and their communities and to support nonprofit organizations that assist in the endeavor.

These measured but meaningful proposals are an excellent start and should receive broad bipartisan support in Congress and widespread adoption by law enforcement agencies.

If successfully implemented, these proposals should lead to greater accountability and transparency, increased trust between the police and the communities they serve, improved professionalism of police forces, and officer wellness.

The proposals also should result in more humane and safe treatment for those in distress who are homeless or suffering from the throes of addiction or a mental disorder and enter the criminal justice system as either perpetrators or victims.

This is welcome news in troubled times.

This commentary was modified shortly after publication to incorporate the Trump administration’s final language in the order.

This article by John G. Malcolm first appeared in The Daily Signal on June 16, 2020.