Trump's Micro-Campaign Pitch: Can it Work? 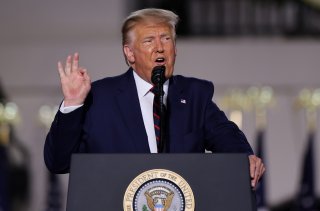 The Trump campaign just announced a policy agenda for his second term. It is notable for its brevity. In 467 words, the agenda lists goals ranging from eradicating COVID-19 and restoring economic growth to health care, immigration, foreign policy, and other issues drawn from today’s headlines. The agenda will be roundly criticized for not explaining in detail what the president would do to achieve those goals. Whatever you might think about the goals, this is not a plan for running the government for the next four years. That’s precisely the point.

In a world of smart phones, e-mails, instant messages, and an endless supply of electronic distractions, it’s no surprise that America’s attention span is short. Goldfish may have an attention span that exceeds that of humans — nine seconds versus eight seconds, supposedly — but they don’t vote. The challenge for political office seekers is how to grab our attention before we shift our focus to something else.

That’s why COVID-quarantined political conventions don’t work. People watching at home need a cheering crowd to get excited about their candidate. Enthusiasm is infectious, and so is boredom. The Democratic National Convention followed the advice of health experts and kept the crowds away. Even the best-crafted speech falls flat when the audience reaction is through a few dozen Zoom images.

The Republican National Convention is flouting conventional wisdom by holding a real convention (at least to start), complete with cheering (and largely unmasked) supporters. Instead of the faux suspense of keeping the candidate out of view until the last day of the convention, Donald Trump will be appearing every day to give his patented, largely unscripted ramble that jumps back and forth among issues. Instead of a polished speech, this is the kind of conversation you could have with your friends after a few beers.

Trump’s policy agenda fits right in. There are no long position papers or detailed policy strategies. It only occasionally mentions an obscure policy that most voters won’t understand.  (My favorite: “Allow 100% Expensing Deductions for Essential Industries like Pharmaceuticals and Robotics who Bring Back their Manufacturing to the United States.” Huh?)

Policy wonks will be upset. How can we understand where the candidates stand if they don’t give us the details?

The Biden campaign provides lengthy explanations of his views on 46 policy areas, and the Biden-Sanders Unity Task Force helpfully adds another 110 pages of supporting detail. The Trump campaign offers 467 words. Trump does not have everything figured out, but his message is more likely to be read by the average voter.