Trump's New Directive Will Keep the Arctic Safe for America 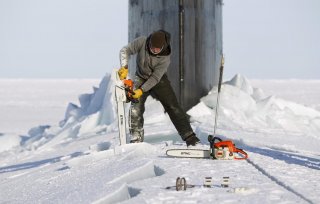 President Donald Trump released a presidential memoranda last week with a lot of excellent policy for Arctic and Antarctic security.

The U.S. has been an Arctic nation since the purchase of Alaska, meaning it possesses territory and resources above the Arctic Circle. It also supports research and upholds treaties in Antarctica.

These regions are seeing increased activity from Russia and China, raising the specter of competition or conflict. The best way the U.S. can address this situation is to ensure that it has the resources it needs to actively patrol them.

The president’s memo tasks high-ranking members of the executive branch, including the secretaries of the Department of Defense and Department of Homeland Security, with assessing the polar icebreakers program to ensure the U.S. has sufficient assets to secure its interests in the Polar Regions.

There are three things that stand out in this latest directive.

First, the plan gives much-needed attention to an important but neglected program, and aims to build an adequately sized fleet.

Coast Guard icebreakers, or Polar Security Cutters, as they are known, perform 9 of the 11 Coast Guard statutory missions, including law enforcement, search and rescue, and defense missions.

They are the primary U.S. instrument in polar international cooperation, competition, or for deterring conflict. The U.S. cannot shape events in an area it cannot physically access.

The Polar Security Cutter fleet contains the only ships capable of operating in the ice-filled water of the Arctic and Antarctic. Unfortunately, the fleet has deteriorated over the years. Without it, the U.S. cannot operate in these areas with ships.

It is currently comprised of two icebreakers, after a third was decommissioned several years ago and now serves as spare parts.

The Polar Star, a heavy icebreaker, was commissioned in 1976 and is already several years past its expected retirement date. It is currently the nation’s only operational heavy icebreaker.

It has a number of mechanical issues and has to go in for repairs every year after completing a resupply mission to the McMurdo Research Station in Antarctica.

The other icebreaker, the Healy, is newer than the Polar Star but was designed as a research vessel, and struggles with breaking thick ice. As a medium icebreaker, it lacks the power that a heavy icebreaker like Polar Star has.

If either of these ships break down—which could easily happen to Polar Star—there is no reserve ship in the fleet to rescue them.

The president’s memo grasps the importance of expanding the fleet of icebreakers to a total of six, as opposed to simply replacing the Polar Star with a new ship. The current fleet is not large enough to meet the growing needs in both regions.

As Heritage Foundation experts have explained, the Coast Guard needs a fleet of six icebreakers, with at least three heavy icebreakers, not just one or two.

In order to have a single ship operating at all times, as a general rule of thumb, it takes an additional two ships in the fleet, as they need to refit, conduct maintenance, and transit from port to their areas of operation.

Additional icebreakers would also be necessary to rescue one of the deployed ships if it suffered a mechanical breakdown or got stuck. That is why a fleet of six is so important.

Second, there is a clear timeline for when the new ships should be operational.

The president’s memo sets the goal of “a ready, capable, and available fleet of polar security icebreakers that is operationally tested and fully deployable by Fiscal Year 2029.”

When deployed, this fleet will provide persistent presence in both the Arctic and Antarctic to secure U.S. interests and support allies. Given the activity in the Polar Regions of Russia and China, the U.S. cannot afford to wait forever for a new fleet.

Setting a finish line for when it should be deployed helps with that.

These are vitally important considerations, and ones that are often overlooked.

Heritage has also called for taking steps toward building an Arctic port, and an analysis of its utility is a logical first step. Such a strategic port could help the U.S. project power and influence into an important region.

By prioritizing this important program and growing the fleet of icebreakers, the Trump administration can build a foundation for ensuring America’s interests are defended in the Polar Regions for years to come.

This article by James Di Pane first appeared in The Daily Signal on June 16, 2020.