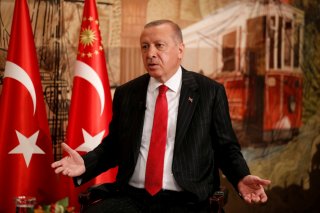 The 39-member FATF was founded in 1989 to defend the integrity of the international financial system. Turkey has been a member since 1991. FATF first put Turkey on its grey list in 2011. In 2012, Turkey came close to being blacklisted, as FATF warned Ankara that the watchdog “will initiate discussions on Turkey’s membership” if “adequate counter terrorist financing legislation has not been enacted by October 2012.” FATF’s “black list,” which currently includes only two countries, Iran and North Korea, designates high-risk jurisdictions against which the watchdog “calls on all members and urges all jurisdictions to apply enhanced due diligence” and “counter-measures to protect the international financial system.”

Grey listing is a step that precedes a jurisdiction’s inclusion on the black list. FATF removed Turkey from its grey list in 2014 after Ankara made various amendments to Turkey’s legal and regulatory framework. Ankara’s systematic shortcomings in implementation, however, continued to draw criticism from Turkey’s Western allies.

In December 2019, FATF warned that unless Ankara improves its “serious shortcomings,” Turkey risked being added to the grey list once again. In Turkey’s mutual evaluation report, an in-depth peer review that includes analysis and recommendations by members states, FATF highlighted the “need to improve measures for freezing assets linked to terrorism and proliferation of weapons of mass destruction.”

Being put on the grey list “can scare away investors and creditors, hurting exports, output and consumption. It also can make global banks wary of doing business with a country,” as the Associated Press reported yesterday. Former U.S. Treasury Department officials told The Wall Street Journal that FATF’s designation of Turkey will “likely spur an exodus of money out of the country as banks and other foreign investors are forced to reassess their exposures.”

Turkey can scarcely afford another blow to its ailing economy. The lira has fallen to an all-time low, having depreciated by 23 percent so far this year, while inflation is at 20 percent. As of last year, the Erdogan government’s financial mismanagement had already prompted the biggest outflows from Turkey’s debt and equity markets in more than a decade and has also dried up foreign direct investment from Ankara’s traditional economic partners in the West. Right before FATF’s decision, the London-based chief economist of a global investment bank tweeted that Turkey has become “an irrelevance to global emerging market investors,” since the country now comprises only “0.2% of the Global Emerging Market MSCI equity index.” MSCI, the world’s largest index provider, warned last year that it was considering ejecting Turkey from its emerging market index and reclassifying the country as a “frontier” or “standalone” market.

Pleyer said, “Turkey has made some progress across all areas of concern. However, serious issues remain,” especially in “supervision in particularly high-risk sectors, such as banks, gold and precious stones dealers, and real estate agents.” He added that Ankara “needs to show it is effectively tackling complex money laundering cases and show it is pursuing terrorist financing prosecutions in line with its risks and prioritizing cases of UN-designated terrorist organizations, such as ISIL and al-Qaeda.”

However, rather than prosecuting jihadist financiers, the Turkish government is turning a blind eye to their activities, as U.S. Treasury Department designations continue to show. Likewise, evidence from federal court cases exposes not just the negligence but also the complicity of the Erdogan government in illicit financial activities, including sanctions evasion.

Since 2019, Treasury’s Office of Foreign Assets Control (OFAC) has issued seven sets of designations targeting Turkey-based or Turkey-linked jihadist individuals and entities. These sanctions, which OFAC issued in April, September, and November of 2019 and in January, May, August, and September of 2021, demonstrate Washington’s heightened vigilance against jihadist networks operating within the borders of an increasingly adversarial NATO member state. In addition to al-Qaeda, these sanctions targeted illicit financial networks linked to the Islamic State, Hamas, Iran’s Islamic Revolutionary Guard Corps, and the Egyptian group Harakat Sawa’d Misr. These links show the extent to which Turkey has become what NPR in 2014 referred to as the “jihadi highway.”

The Erdogan government has also been a key facilitator of Iran’s and Venezuela’s sanctions evasion schemes. In 2018, a Manhattan federal court sentenced Mehmet Hakan Atilla, the Turkish public lender Halkbank’s deputy general manager, to 32 months in prison for participating in a multibillion-dollar scheme to violate U.S. economic sanctions against Iran. Halkbank itself now faces a federal indictment on charges of fraud, money laundering, and other offenses related to its participation in that scheme. In 2019, Treasury designated an Istanbul-based company for facilitating payments made as part of a “corruption network for the sale of [Venezuelan] gold in Turkey,” linked to a key facilitator of the Nicolás Maduro regime’s sanctions-evasion and bribery schemes.

Two other federal cases point to Ankara’s terror finance problem. In October 2020, a judge in the Eastern District of New York ruled that plaintiffs could move forward with a landmark case against Turkey’s Kuveyt Turk Bank for aiding and abetting the Palestinian terrorist group Hamas. Additionally, 876 victims of Iran-sponsored terrorism are pursuing civil action against Halkbank in a Southern District of New York court for helping Tehran avoid the financial consequences of its support for terrorist attacks.

Erdogan has a troubling history of covering up cases against sanctions busters and rewarding sanctions evaders with cushy appointments, including one who went on to serve as an ambassador and another as CEO of the Istanbul stock exchange. Furthermore, since 2008, the Erdogan government has declared seven wealth amnesties, which allowed individuals and entities to repatriate previously undisclosed offshore assets and to declare their domestics assets without facing any legal scrutiny or tax penalties. During the run-up to the last wealth amnesty, in June 2020, Transparency International Turkey Chair Oya Ozarslan warned that Turkey’s policy can “create a risk of introducing black money … into the system” by facilitating money laundering and terror finance.

Besides offering a permissive jurisdiction for illicit finance, the Erdogan government also helps other permissive jurisdictions avoid FATF scrutiny. In 2018, Turkey joined China and Saudi Arabia in trying to block a U.S.-led effort to place Pakistan on the grey list. Ankara remained opposed to the measure even after Beijing and Riyadh withdrew their objections. Last year, Erdogan announced that he opposes adding Pakistan to FATF’s black list.

The Erdogan government was dealt additional blows this week. The European Commission said Turkey has made no progress in the fight against corruption and failed to “establish anti-corruption bodies in line with Turkey’s international obligations.” The commission also recommended that Ankara improve the “legal framework regulating the fight against money laundering and terrorist financing,” in line with the “recommendations of the Financial Action Task Force and those of the Venice Commission on the law on preventing financing of proliferation of weapons of mass destruction.”

Despite this flurry of criticism, the Erdogan government shows no signs of recognizing Turkey’s serious and growing illicit finance problem. Turkey’s Ministry of Treasury and Finance responded to FATF by saying that the watchdog’s action was “undeserved.” Turkish Interior Minister Suleyman Soylu slammed FATF’s decision by accusing Europe of “financing and empowering terrorism.” He went as far as to claim that the grey list decision was retaliation for Ankara’s measures to stop LGBT individuals from “corrupt[ing] our country’s morals,” and for Turkey’s actions against Washington’s Syrian Kurdish-led partners in the fight against the Islamic State in Syria. Soylu added, “We consider this decision to be a political decision. You are involved in all kinds of perversions. We are not like that; we are a Muslim nation.”

Washington should continue to designate Turkey-based and Turkey-linked illicit financial actors and encourage its allies to do so as well. U.S. authorities should also intensify their ongoing efforts to extradite from Austria the Turkish money laundering suspect Sezgin Baran Korkmaz, who could help expose an extensive and interconnected web of Iranian, Turkish, and Venezuelan illicit financial dealings. Congress and the administration should pressure the Erdogan government to fully implement FATF’s recommendations, which are necessary to protect the integrity of the international financial system. If Turkey does not implement the FATF recommendations in the near future, the watchdog would have ample reason to move Turkey from the grey list to the black list.