Turkey's Future Will Rely Neither on Russia Nor the West 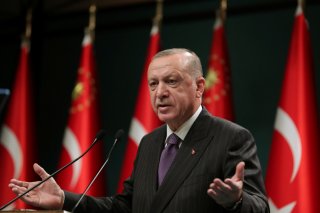 Recent analysis of Turkey’s foreign policy tends to focus on several complementary narratives. Ankara is seen to be slowly moving away from its NATO partners and towards Russia. Turkish President Recep Tayyip Erdogan appears to be pursuing a strategy of balancing the West and Moscow against each other, but this balancing act is viewed as likely to fail, leaving Turkey without friends or allies. In response, the EU and the US are perceived as needing to maintain an equilibrium by reining in a recalcitrant and increasingly assertive Turkey while keeping it within the NATO tent and out of Moscow’s orbit.

Turkey’s continued membership of NATO remains an important objective for both Brussels and Washington, despite Ankara’s increasingly antagonistic attitude towards its NATO partners and its destabilising military adventurism in Syria, Iraq, Libya, the eastern Mediterranean and Nagorno-Karabakh.

Brussels’ and Washington’s willingness to make concessions to preserve Ankara’s participation in NATO was evident in the twin packages of sanctions announced in early December. Both packages stopped short of the full suite of measures initially under consideration in the US and the EU, reflecting their enduring desire to limit the risk of further alienating Ankara and pushing it away from its NATO allies.

But, unlike the US and the EU, Turkey doesn’t necessarily view its future as a binary choice between the West and Russia. For Ankara, this likely represents a false choice between two options that would likely constrain rather than enable its ambitions.

Turkey under Erdogan is increasingly pursuing an activist foreign policy designed to achieve two objectives: challenge the status quo and forge a global leadership role, and enhance the regime’s domestic legitimacy and ensure its survival. Erdogan’s strategic disposition has also been categorised as both pan-Islamist and neo-Ottomanist, designed to leverage Islamic identity and renew a ‘classical, civilizational model of the Ottoman Empire’s legacy anchored by economic, military, and political power’.

Ankara probably presents more significant strategic challenges for Moscow than for the West. While Turkey is currently at odds with Greece and other NATO partners in the eastern Mediterranean, it is also pursuing a deliberate and nuanced strategy of engagement with countries across the Black Sea littoral region, the Caucasus and Central Asia. This strategy will provide it with a new sphere of influence and strategic partnerships independent of its traditional NATO ‘allies’, while also increasing the prospect of a confrontation with Russia by encroaching on Moscow’s traditional zones of influence and control.

The most obvious manifestation of this strategy was Turkey’s role in the conflict in Nagorno-Karabakh. Azerbaijan was already a critical element in Ankara’s plan to wean itself off dependency on Russian gas and in mid-2020 had overtaken Russia as Turkey’s main supplier of gas. Turkey was able to leverage the conflict between Azerbaijan and Armenia to consolidate its burgeoning alliance with Azerbaijan, while also ‘muscling into Russia’s backyard’. More importantly, Ankara saw an opportunity provided by Russia’s effectively vacating its historical role of regional hegemon, and exploited Moscow’s inertia to formalise its status as a key player in the Caucasus at Russia’s expense.

Turkey is arguably applying a similar calculus to its growing engagement with Ukraine. A mid-October presidential summit between the two countries advanced a defence cooperation partnership, bringing about a ‘new geopolitical reality in the Black Sea region’. The cooperation agreement signed by Ankara and Kyiv encompasses advanced defence industrial collaboration on aerospace engines and unmanned aerial systems, including the co-production of an unmanned fighter jet. In a direct challenge to Moscow, Turkey also agreed to sell its well-regarded Bayraktar armed drone to Ukraine and has purchased the Ukrainian-modernised S-125 (Goa-3) surface-to-air missile system.

Ankara also appears set on revitalising the idea of pan-Turkic solidarity to build an alliance across Central Asia and the Caucasus. Turkey was a founding member of the Cooperation Council of Turkic-Speaking States that was formed in 2009 with the primary goal of deepening cooperation between Ankara and the Turkic-speaking states of the former Soviet Union. This group was seen as ‘tailor-made to extend Turkish influence in Central Asia’. While it got off to a slow start, it appears to have gained relevance and momentum since late 2019 when Uzbekistan formally joined.

Significantly, Turkey is also pursuing a program of defence cooperation with the two largest Central Asian states, Kazakhstan and Uzbekistan, that presents a direct challenge to Russia. Kazakhstan has entered into a military cooperation agreement with Turkey that encompasses defence industry, intelligence-sharing, joint exercises, information systems and cyber defence, as well as military training and military scientific and technical research. Uzbekistan signed a similar agreement with Turkey in late October, during a visit by the Turkish defence minister. This visit also gave rise to an intriguing albeit largely fanciful debate about the creation of an ‘Army of Turan’ and a NATO-style military bloc of all six Turkic-speaking states led by Ankara.

These initiatives, all of which appear to be conducted in stark defiance of Russian interests given they are directed at countries historically within Moscow’s orbit, suggest that Ankara is heading on a collision course with Moscow rather than towards a detente. And while Russia may have tolerated confrontations with Turkey in Syria and Libya, where their proxy armies have been in direct conflict, it’s likely to be less tolerant of Ankara’s manoeuvrings in its own backyard.

Policymakers in Washington and Brussels correctly view the growing crisis with Turkey as presenting a challenge to the future of NATO. But they also need to be careful to not conflate this issue with more enduring existential questions about NATO’s core purpose and its broader membership. It is evident that Turkey is forging a new geopolitical axis that may see it increasingly diverge from the core objectives of NATO.

But, importantly, this axis will also act as a counterbalance to Russia across the Middle East and Eurasia. Policymakers in Washington and Brussels ruminating on how to manage Ankara should remain mindful of this. They should continue to leverage the transactional nature of Turkish foreign policy under Erdogan to encourage Ankara to work with the West, rather than against it, regardless of whether Turkey remains a functional member of the NATO alliance.