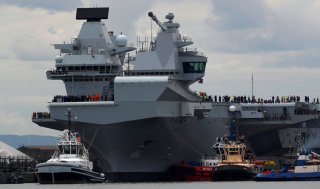 Here's What You Need To Remember: If the reorganization succeeds, the Royal Navy will evolve from a thinly but widely spread force to one that deploys to fewer places at a time, but does so in greater concentration. The Royal Navy would become what Tony Radakin, the new first sea lord, called “a proper, carrier task group navy.”

David Axe was the Defense Editor of the National Interest. He is the author of the graphic novels  War Fix,War Is Boring and Machete Squad. This article first appeared in August 2019.