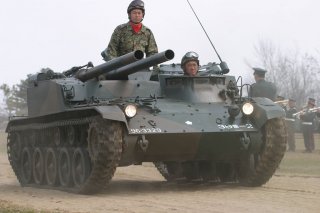 Here's What You Need to Remember:  The platform never saw combat.

First fielded in the early 1960s, this odd-looking tank destroyer took a page from the United States Marine Corps’ tank destroyer playbook by mounting not one but two recoilless rifles on the top right of the hull.

The Type 60’s dual 105mm M40 rifles fire a large rimmed High-explosive Anti-tank (HEAT) cartridge. Though the Type 60’s crew rode inside, fully enclosed within the squat little tank destroyer, the Type 60’s two main guns were reloadable only from outside the tank. After both guns had been fired, the loader would have to actually open his rear hatch and reload the guns from behind the tank in a dangerously exposed position either on top of the hull or on the ground at the rear.

In addition to the Type 60’s less-than-ideal reloading operation, the tank destroyer had an almost-unbelievably small amount of on-board ammunition. On top of the two rounds carried in the guns themselves, a paltry six additional rounds were stored internally, affording the Type 60 only four volleys—eight shots—before ammunition exhaustion.

In addition to the platform’s limited amount of ammunition, so too was the Type 60’s armor package lackluster. An estimated half-inch of steel armor protection would have provided some protection against small arms fire, though its utility against larger caliber rounds and armor-piercing projectiles would probably have been limited.

Still, the Type 60’s light armor protection and small amount of ammunition was part and parcel of the small tank destroyer’s mission—ambush.

Rather than duking it out one-on-one with tanks, the Type 60 was better suited to shoot and scoot fights. Aided by its relatively squat profile, the Type 60 could lie in wait along avenues that enemy tanks would be likely to drive through.

In the first few seconds of a tank fight, the Type 60 might have had a decisive advantage: it could fire two initial shots thanks to its dual rifles compared to a tank’s single shot. With enough patience and self-control, a Type 60 gunner could get two shots on target—and then beat a quick retreat, escaping enemy fire.

The Japan Ground Self-Defense Force retired the Type 60 in the late 2000s after nearly fifty years of service. The platform never saw combat.

Today, the Type 60 has been superseded by Japan’s Type 16, an light-weight eight-wheeled tank destroyer that sports a 105mm main gun inside a turret, not dissimilar to the United States’ M1128 Mobile Gun System, essentially a Stryker with a turret mounted 105mm main gun.