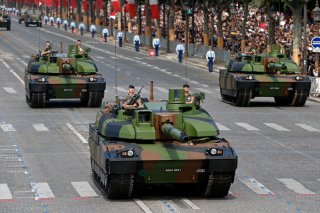 Here's What You Need To Remember: At 60 tons, the Leclerc is 10 tons lighter than most Western main battle tanks are. There are many benefits — a good power-to-weight ratio, lower ground pressure, superb acceleration and a comparatively high maximum speed of 45 miles per hour.

(Recommended: US Army's 5 Most Lethal Weapons of War)