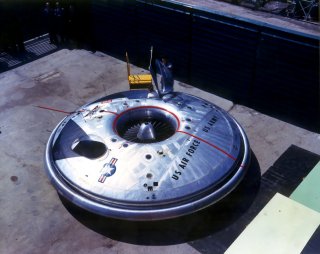 Here's What You Need to Remember: Ultimately the Avro was done in by the Harrier family of jump jets, which were capable of VTOL operations, and could exceed Mach 1 speed. The other factor that killed the Avro was the change in strategic thinking that gradually began to believe a nuclear strike would not happen at the beginning of the next war in Europe.

The Avro Avrocar vertical take-off and landing (VTOL) aircraft was designed by Avro of Canada for the U.S. military. The project was originally intended as a highly capable fighter aircraft, but the project proved to be complex. The goals of the Avrocar project reportedly changed names, and hands several times, eventually being abandoned by the U.S. Air Force, and ultimately the U.S. Army as well.

Caleb Larson holds a Master of Public Policy degree from the Willy Brandt School of Public Policy. He lives in Berlin and writes on U.S. and Russian foreign and defense policy, German politics, and culture. This article first appeared in 2020.