The UK Should Stop Talking Tough on a No-Deal Brexit 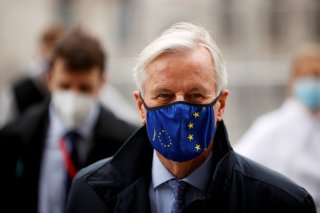 Reaching an agreement in trade deals is, in the best of times, a long process. There are inevitably differences in objectives and negotiation strategies between sides. Most trade agreements with the EU take years to negotiate, not least because there are 27 member states involved in the process. And when it comes to the negotiations between the EU and the UK over Brexit, an element of rational versus emotional approaches is at play too.

Negotiations are resuming after a period of stalemate. Different strategies have been attempted to break the deadlock, including the threat of a no-deal exit. The UK is toying with the idea of abandoning already agreed issues and the EU has threatened legal action if it does. These moves are damaging trust between the parties, even if they are merely negotiaton strategies.

Ideally, the UK wants single-market access and special agreements for financial services and security and the Northern Ireland border. It wants no free movement of people, which is a big ask given the amount of access it expects. The EU wants some governance system for future conflict resolution through the European Court of Justice, while the UK wants that conflicts involving the UK should be dealt with through its own judicial system. The UK also wants control of its fishing waters, while the EU wants some access for European fishermen.

It is in the interest of both parties to strike a deal. Strong bargaining positions are used by experienced negotiators to achieve an expected outcome – an agreement. But the UK, at times, talks as if no-deal is an intended outcome. It is not. It would be the the result of a failed negotiation.

State aid has been a sticking point, with the EU wanting an agreement that the UK will not use state subsidies to undercut the EU while trading with its partners. The UK is reluctant to agree to that.

However, during the pandemic, most governments have been subsidising their companies, so there is reason to think that the EU might be flexible on this issue. In that case, the UK will have to show flexibility on other issues, such as fisheries. Negotiations, after all, mean give and take and compromise. Proposing to go back on the Northern Ireland border deal might be a negotiation tactic, but it has not played well and the EU seems to be losing trust.

The main issue is that both parties seem to have different priorities. While the EU is more concerned about the economics and trade implications, the UK is primarily concerned about sovereignty and independence. However, the UK has more to lose from a no-deal Brexit and there is considerable opposition to it from the British public and businesses.

The European Union is the UK’s biggest trading partner, both in terms of value and volume. It’s much bigger than the US and all Commonwealth countries put together. It is therefore hard to see how new post-Brexit deals can entirely replace what would be lost in the event of a no deal.

Moreover, other countries have their own priorities about what they want to achieve through trading with the UK. The US, for example, wants access to food and pharmaceutical markets for American firms. UK citizens, meanwhile, are not enthusiastic about chlorine-washed chicken, hormone-filled beef, genetically modified food products and highly inflated branded medicines. Nor would there be shortages of these products domestically in the event of a no-deal Brexit anyway.

In the UK, some sectors will be hit hard, however, including energy, financial services and manufacturing that requires components from the EU.

The US has already started dictating terms for post-Brexit trade. Both political parties in the US have also shown their disapproval of the UK’s proposal to go back on the Northern Ireland border deal. The consequence of no deal will definitely lead to three to five years of very tough times for the UK and its citizens – until they get some deals in place, including with the EU.

Tough talk from a tight spot

We need to distinguish between bargaining power and negotiation strategy. The UK is already outside the EU, and therefore does not have a strong bargaining position. The COVID-19 crisis has further reduced the bargaining power of the UK, while EU member states received support for their economies and are collaborating with each other on tackling the pandemic from PPE to vaccine development.

The UK has chosen to use a tough negotiating strategy in spite of its position. In our ongoing research with experienced negotiators in international trade negotiation experiments, which has yet to be published, we are seeing that British negotiators often start very high with their demands but are unable to adapt their offers and concessions at the proper time to reach an agreement.

Tough negotiators quickly consider concessions, whereas British negotiators get stuck on a high level and are too conflict averse to adapt their demands to reach an agreement. That often leads to a deadlock or breakdown of negotiations.

Too much is at stake here not to prepare properly for negotiations with realism. A no-deal outcome would be detrimental for businesses, the economy and society because the UK is strongly dependent on trade with the EU. With the COVID-19 situation, this will have huge implications for British society and the economy. This would be the worst-case scenario .