Ukraine and Russia: Are We Headed for a Bloody War in Europe? 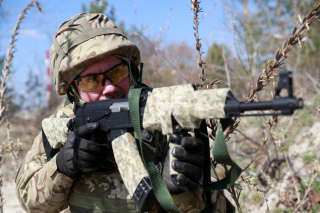 Here's What You Need to Remember: The threat of an invasion and a military escalation in Ukraine cannot be completely ruled out. But the ostentatious way in which Russia appears to be going about the matter against the backdrop of a spike in tensions with the US, suggests that – for the present at least – the developments are probably more of a deliberate display of power rather than an imminent threat of war.

Russia’s recent build-up of 80,000 troops on its eastern border with Ukraine and in Crimea has put the international community on high alert. There are widespread concerns about Moscow’s intentions and a possible threat of war.

Technically, Ukraine and Russia have been engaged in a conflict since 2014, when Russia annexed Crimea and backed separatist forces in Ukraine’s eastern regions of Donetsk and Luhansk (collectively Donbas).

The ongoing hostilities in the region have largely faded from the international headlines in recent years. But the latest aggravation in the security situation serves as an important reminder that the conflict is far from over. In fact, given the strategic importance of Ukraine to Russia, any solution to the crisis remains very distant. A combination of several possible factors is likely to explain why we are seeing this intensification in regional tensions now and why Russia might be seeking to escalate the conflict in Ukraine.

First, following the election of Joe Biden as US president, the deterioration in relations between Moscow and Washington was expected, with an intensification of hostilities in eastern Ukraine being one way in which Russia was likely to project its dominance.

Second, there has been a recent intensification of discussions about Ukraine accelerating its membership in Nato. While this is highly unlikely for the foreseeable future, Ukraine joining the western alliance has always been categorically opposed in Moscow.

Third, in February, Ukraine’s president, Volodymyr Zelensky, stepped-up efforts aimed at curtailing the influence of pro-Russia political and oligarchic forces in Ukraine, as demonstrated by the sanctioning of Russian president Vladimir Putin’s close friend and one of Ukraine’s opposition leaders, Viktor Medvedchuk.

Fourth, so far, Moscow has failed to resolve the enduring water insecurity issues in Crimea, which it pledged to address by the summer of 2021, after Kyiv cut off water supplies to the peninsula. This continues to result in very high costs for Moscow, with some estimates suggesting that the occupation of Crimea cost Russia about US$23 billion (£16.7 billion) during the first five years. As such, the recent military build-up could be a way to pressure Kyiv on the issue.

Fifth, Turkey has also recently increased its support for Ukraine and condemned Russia’s aggression during a meeting between Zelensky and Turkish president Recep Tayyip Erdoğan on April 12.

Russia has reportedly expressed concerns over the presence of Turkish drones in the Donbas. This issue is likely to be especially contentious given that Russia-Turkey relations came under severe strain after Turkey offered strong backing to Azerbaijan during last year’s war with Armenia over the disputed territory of Nagorno-Karabakh. Russia perceived this as an intrusion on its regional sphere of influence.

But despite this intensification in regional tensions, the risk of a military confrontation between the two countries or an outright Russian invasion of Ukraine currently remain relatively unlikely. There are several reasons for this.

There is a precedent for Putin using foreign policy adventurism to boost his approval ratings – annexation of Crimea in 2014, for example. But the potential economic costs that such an intervention would bring are likely to be too great, especially ahead of the crucial State Duma (lower house) elections in September 2021.

Moreover, on April 15, Washington imposed new sanctions on Russia that place restrictions on buying new sovereign debt. This is significant because it shows Biden is prepared to back his rhetoric with action.

As such, considering that the additional costs of further expansion into Ukraine’s territory could be met with even more economically damaging measures, along with a potential derailment of the Nord Stream 2 gas pipeline – which would deliver Russian gas directly to Germany – could prove too costly for the Kremlin.

The costs of a potential military escalation from Kyiv’s perspective are also likely to be too great. Zelensky’s key campaign promise in 2019 was to end the war in the Donbas, so the threat of the opposite occurring would cause an irreparable damage to his approval ratings, which have been in decline since he took office.

Despite a notable increase in rhetorical support for Ukraine, the west is unlikely to offer military backing should the situation rapidly deteriorate. No international military support was offered when Russia annexed the Crimea in 2014 and Ukraine has not since become a member of Nato. This would leave Kyiv to fend for itself and inevitably incur tremendous costs as a result.

In the short term, heightened political tensions between Moscow and Washington will most likely result in the former retaliating against the latest sanctions, with Biden’s proposal to meet Putin at a summit to discuss the situation in Ukraine unlikely to occur in the immediate term.

Notably, however, despite the latest political aggravation between the two powers, the fact that the latest sanctions are relatively restrained and that, on April 14, Washington also cancelled the deployment of US warships to the Black Sea, signal that while Biden is willing to stand up to Putin, Washington is also leaving the door open for dialogue.

The threat of an invasion and a military escalation in Ukraine cannot be completely ruled out. But the ostentatious way in which Russia appears to be going about the matter against the backdrop of a spike in tensions with the US, suggests that – for the present at least – the developments are probably more of a deliberate display of power rather than an imminent threat of war.

Liana Semchuk is a PhD Candidate in Politics, University of Oxford